The Annie Moore Annual Awards, sponsored by the Irish Lobby for Immigration Reform (ILIR), were held on Tuesday, May 13th at the New York Athletic Club in Manhattan.

Inaugurated three years ago, the Annie Moore Awards are given to Irish and Irish Americans in recognition for their efforts on behalf of the Irish immigrant community in the United States. They are named after the Irish girl who in 1892 became the first immigrant to pass through Ellis Island. This year, Seam Mackin was presented with the Patrick J. Donaghy Award and James Boland received the Irish Spirit Award. Both recipients are Irish immigrants themselves who have since become labor leaders and strong advocates of immigration reform.

Mackin, born in Belfast and a Republican since the age of 11, is currently the president and owner of Preferred Mechanical Inc. and Preferred Sprinkler Corp. In 1978, after having been detained without charge on several occasions, Amnesty International cited his case as one of the five most serious instances of torture they had seen in Northern Ireland. He emigrated to the United States in 1983, but was arrested 10 months later by the FBI at the behest of the British government. After a prolonged legal battle, he and his wife Philomena and their daughter Jennifer were officially granted political refugee status, his wife and daughter becoming the first Irish women to be granted political asylum in the United States. He later became a key voice in the Northern Irish peace process and has worked with the ILIR for years to lobby for fair immigration laws in addition to advising numerous members of Congress, Democrat and Republican, on Irish and Irish American issues.

Leitrim-native James Boland is the president of the International Union of Bricklayers and Allied Craftworkers (IUBAC) whose life has been devoted to advocating for fair labor and immigration policy. He has been a member of the BAC since 1977, when he joined California’s Local 3, later becoming its president after working for a decade in brick, block, stone, and marble.

Speaking of the achievements of these men and the progress the ILIR has made in their efforts at immigration reform, ILIR co-founders Niall O’Dowd and Ciaran Staunton were hopeful of achieving bi-partisan support of the immigration bill now in the House of Representatives. The bill, which passed in the Senate, would be a boon to undocumented Irish immigrants currently living in the U.S. and would increase the number of visas given to Irish immigrants each year, effectively making illegal Irish immigration a thing of the past.

Both honorees spoke off the cuff. Boland thanked his fellow union members who had come along on the night of the event in order to support him. He recounted the immigrant history of the union, saying how the BAC was founded in 1865 to support workers’ rights and now represents trade and craftworkers across the U.S. and Canada. He mentioned that a fair number of Irish have passed through and helped build the union, and that it had always been a union of immigrants, and today they print their orientations letter in several languages including French and Spanish.

Mackin thanked everyone who had helped him gain his legal status, and said it is the families and friends of detainees who suffer the the most. He gave special thanks to his wife Philomena, praising her strength, speaking of how she took care of their young children while he was detained, and urging her on stage to share the award. He also detailed the scene of his arrest in the United States, being picked up with helicopters overhead and the FBI breaking down his door. He spoke fondly of his days among the other “illegals” in the Bronx in the 1980s and said that while it’s not politically correct to use the word “illegal”  any more, that’s what they were back then. Though he also joked that if any of them was questioned they all professed to being American citizens, having been “born in Chicago and taken back to Ireland when they were three.”

From both honorees there was a sense of appreciation for the opportunities that America has afforded them, and a willingness to work for immigration reform so that other immigrants could work towards their American dream. 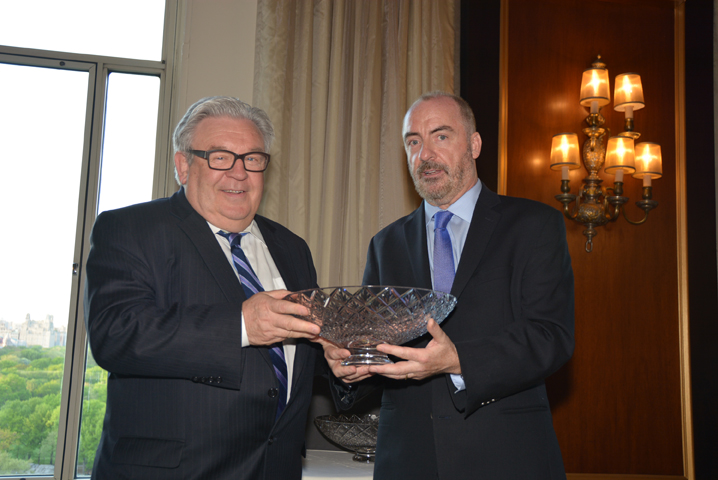 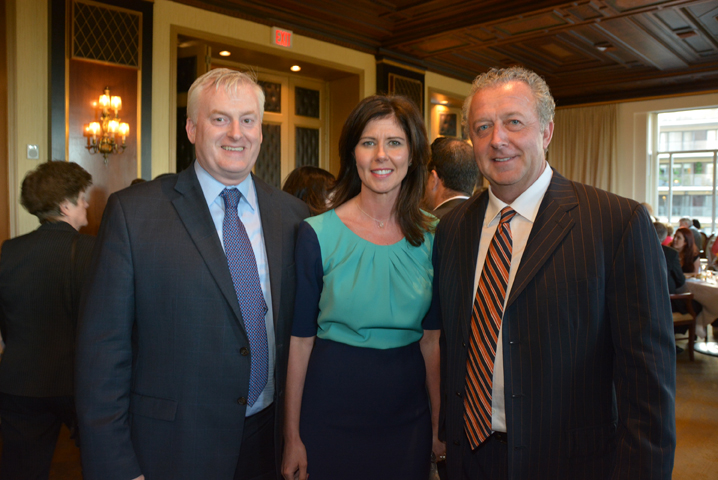 Sean Mackin addresses the guests, as his wife Philomena looks on. 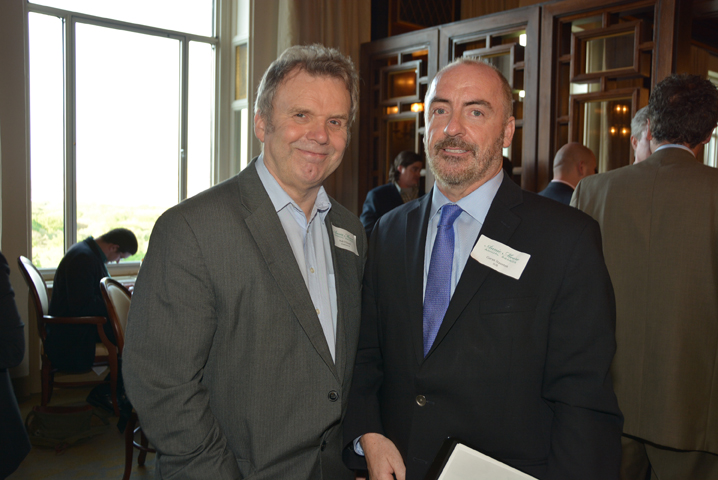