He was there to take part in the ribbon-cutting ceremony for the new Catholic Club, the old one having been destroyed by Hurricane Sandy in October 2012.

Kelly, who when he first visited Breezy Point in March 2013, was so moved by the community’s response in the aftermath of the storm that had wreacked havoc on the area – over 100 homes were destroyed by fires and many more suffered water damage – that he promised to help rebuild the club with funds from the Kelly Cares Foundation, which supports initiatives in health, education and community.

“We are so pleased that we could help in just this small way,” said the coach, who was joined by his wife Paqui in the ribbon-cutting for the center, which has served as the heart of this largely Irish American community since 1922.

Those in attendance ranged from small children wearing Ireland shirts, to long time residents and Notre Dame fans Jim McGuire and his wife, whose home the coach had visited on his first tour of Breezy. 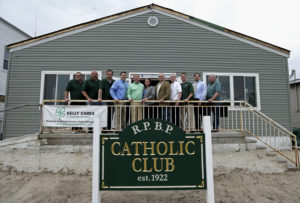 “When we came here to Breezy Point last year, we saw that there was a need here and that was to bring a small piece of that community back,” the coach said. He described the Breezy Point community as a “great team.”

“As a football coach, what I love about great teams is that they come together in times of adversity. So you have a great team. This community is incredible, the people of Breezy Point came together at tough times.”

He said, “[Helping to rebuild the club] was a small way for us to give you a place to come together and celebrate, whether it’s for a First Communion, or the opportunity to share in a wedding, or to watch a Notre Dame football game.”

The mention of Notre Dame brought cheers from the crowd.

After the ceremony, the assembled enjoyed sandwiches and drinks from the brand new bar, yet to be varnished. The coach, who is from the Boston area originally, mingled generously with the crowd, chatting and posing for pictures. He seemed genuinely happy and pleased to be there.

Pat Mullee, who used to coach in Marine Park for an organization called the Brooklyn Hurricanes, was on hand to celebrate the generosity of the coach and his wife. “It’s a grand thing they did,” he said, describing the club as a hub where everybody gets together for family parties, communions and sports events. 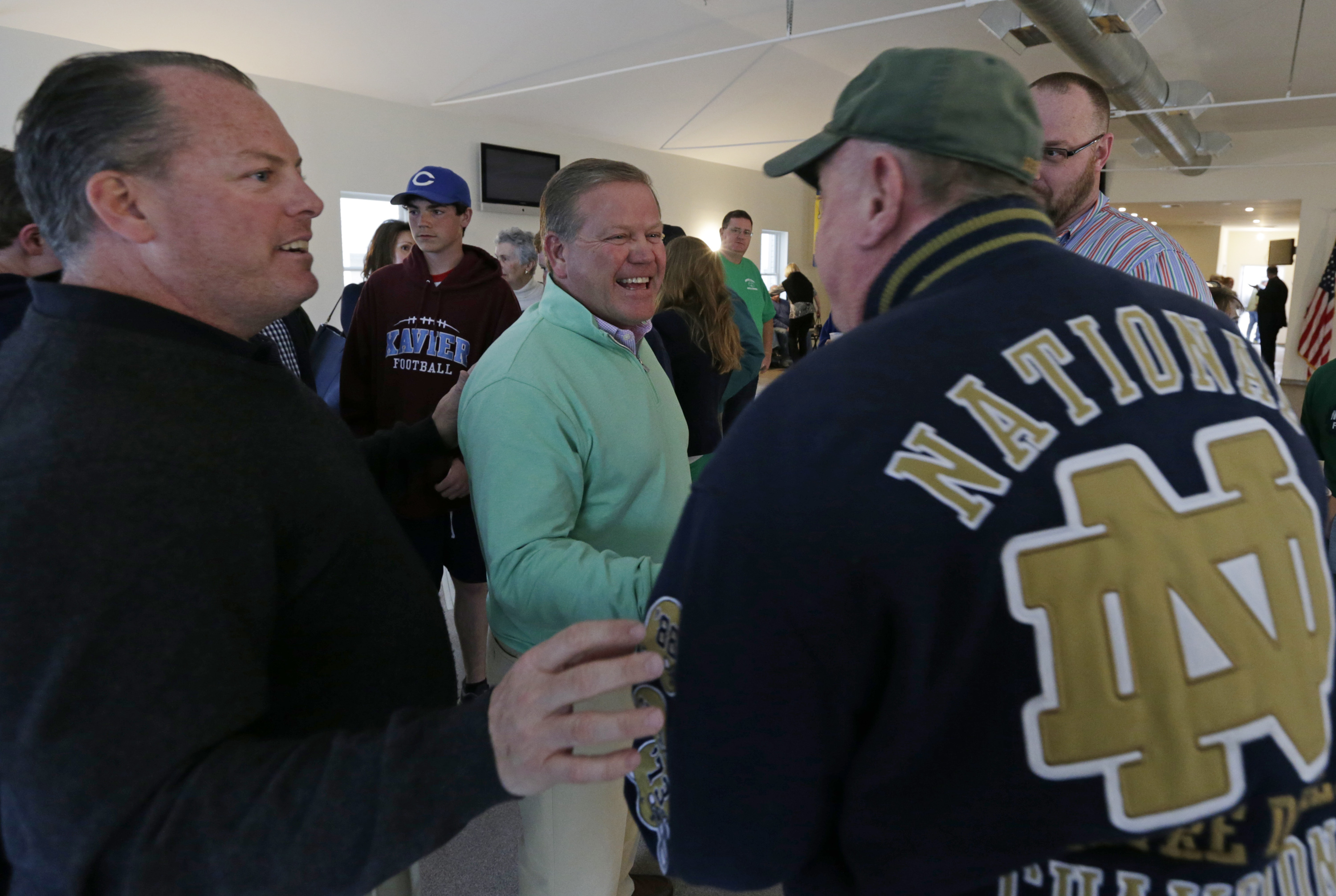 Keir Johnson, the president of the Catholic Club, said, “We are still a work in progress, but thanks to the coach’s generosity we hope to be up and running as soon as possible.” 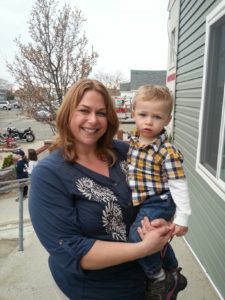 Alicia Johnson and her son Luke at the opening event. Photo by author.

Keir’s wife, Alicia, who was there with the couple’s young son, Luke, said, “tThis community is a very special community and this is the center where families and friends come together, and just to have it up and running is amazing.”

Keith J. Kelly, “Media Ink” columnist at the New York Post, and a founding member of the Kelly Gang (a charitable organization made up of people with the surname Kelly), made arrangements for Coach Kelly’s first visit to Breezy Point when the organization honored him in March, 2013.

“We raised $60,000 for Coach Kelly’s charity at our March 2013 fundraiser and we hoped that by getting him out to Breezy Point, and seeing the devastation first hand, Coach Kelly might turn around and kick some of it back to a Breezy relief charity,” said Keith Kelly. “Instead, he nearly quadrupled the money we gave and used it to rebuild the Catholic Club to the tune of $225,000 from his charity–a game winning touchdown on all fronts.”

Former Police Commissioner Ray Kelly and his wife Veronica, also chipped in. They were “auctioned off” as part of a charity lunch for six at media hot spot Michael’s Restaurant at this year’s Kelly Gang event, raising another $5,000 earmarked for the Catholic Club. Veronica’s parents had a home a short distance from the club in Breezy and their kids, Good Day New York co-host Greg Kelly and Wall Street executive Jim Kelly, were at many events at the club over the years.

Breezy Point is still in recovery but the community stands strong, and having their club back is a major boost to morale.

“One of the pillars of our foundation is ‘community’ and our community stretches across the county and we are just so pleased that we could help this part of the country,” Coach Kelly said.

About Kelly Cares:
Brian and Paqui began Kelly Cares Foundation in 2007, following Paqui’s battle with breast cancer. The foundation’s symbol is a shamrock, which was designed to symbolize both its purpose and need. The left side, featuring heart-shaped clovers, represents faith and love and strength of family. The right side represents God’s blessings of the gifts and talents of our team and our responsibility to share those gifts with others. The “Irish Eyes Gala,” the annual Kelly Cares Foundation fundraiser, was held at the Sheraton Hotel Times Square on April 23 and honored Bon Jovi.

Transatlantic Conversations
The U.S. Role in Renewing
the Peace Process

The Institute of Irish Studies, University of Liverpool joins with the Keough-Naughton Institute for Irish...

Light It Up Green!

Brian Kelly is the founder and CEO of The Points Guy, the digital platform renowned worldwide for all points, miles,...