Clan Kennedy:
Of Presidents and Kings

Camelot might be a misnomer. Brían Boru, the last High King of Ireland, was a Kennedy. 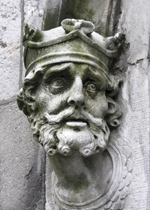 Boru sculpture on the Chapel Royal outside Dublin.

The O’Kennedy genealogies, held by the Royal Irish Academy, record that Ceineidi, King of Thomond, was the father of Brían Bóruma mac Cennétig (c. 941 – 1014), today known as Brían Boru, the last Ard Ri or High King of all of Ireland.

This genealogy traces President John Fitzgerald Kennedy’s likely descent from Ceineidi, King of North Munster in the 10th century, to John “Kenedy,” the first recorded Kennedy in Dunganstown County Wexford in the 18th century, and then on to the late President himself.

The O’Kennedy descendants of Ceineidi moved from the vicinity of Killaloe in County Clare across Loch Derg to Ormond in North Tipperary. They established themselves there as the Lords of Ormond and held and expanded their territory in Ormond up to, and after, the coming of the Normans in the 12th century.

The many written deeds between the O’Kennedys and the Norman Butlers who were awarded their territory demonstrate that the O’Kennedys were a force to be reckoned with. For several centuries they fiercely resisted attempts by the Butler Earls of Ormond to subjugate them. Eventually, in the 16th and 17th centuries, O’Kennedys and Butlers were rebel allies, joint landholders in North Tipperary and even marriage partners.

The joint landholding is seen to be the means by which O’Kennedy husbandmen, horseboys and yeomen moved from North Tipperary to Butler lands in South Tipperary bordering the River Suir. The Cromwellian land confiscations of the mid-17th century put an end to the landholding of the O’Kennedys and the Butlers and displaced the O’Kennedys. The Butlers were returned considerable acreages following the restoration of the English monarchy, but the O’Kennedys received little of their former land in Ormond.

Descendants of some of the displaced Kennedys (the O was ordered to be dropped during the Penal Times), are identifiable as being from particular parts of North Tipperary through the centuries-old tradition they used to name their children. They eventually became engaged in cargo hauling, boating, fishing and farming along the River Suir, a major communication link with counties Kilkenny, Waterford, and Wexford.

This trade network down the Suir eventually caused a gradual migration of Kennedys over more than two centuries from their traditional homelands in North Tipperary to Dunganstown in County Wexford. Traditional Kennedy first names such as Brian, Dermot, James, John, Owen and William, repeated over the generations, can be ascertained to be more relevant to parts of Lower Ormond than to other parts of North Tipperary, especially in areas adjacent to the River Suir, suggesting migration along the waterway.

In fact, the first recorded ancestor of JFK in Dunganstown, John Kenedy, was born in 1740 and was employed by the river industries. Even today, Kennedys living in Dunganstown who are related to the late President have followed the occupations of farming and fishing and still engage in boating. That JFK liked his boats too was just another continuation of the family trade.

EXTRA: O’Kennedy Chief to Be Named After 300 Year Gap

This July, the Kennedy Clan will elect their first chieftain after a lapse of 300 years. The ceremony will take place in Tipperary on Sunday, July 6 at the annual Kennedy gathering, which was reinstated in 2011. The last great O’Kennedy chief of Upper Ormond, County Tipperary, to live in the Gaelic Order and under Gaelic law was Conor alias McTeig (chief) of Ballycahill.

Chiefs of the O’Kennedys of Ireland are recorded as far back as 1152 when Finn O’Kennedy (the fair-haired chief) died. For the next 450 years they had an unbroken succession of chiefs. The line ceased after the Battle of Kinsale with the abolition of the Brehon Laws and the dispersion of the O’Kennedys to the west and the south of Ireland.

All Kennedys and their relatives and friends and other interested people are welcome. Further details are available from: mountainykennedys@gmail.com.

Australian Brian P. Kennedy holds a Master of Education degree from the Queensland University of Technology and has been researching Kennedy history since 1970. His publications include The Irish Kennedys (1998), John F. Kennedy’s Irish O’Kennedy Ancestors (2012), and most recently The Mountainy Kennedys, Vols. 1 and 2. His research and publications have earned him the title of the Seanachi, historian or storyteller, of the Kennedy clan.

N.B. Tulluan Castle in County Tipperary was owned by a sept of the O’Kennedy clan called Fionn (fair). It is being lovingly restored by the Tulluan Castle Fund and currently can be rented out on Airbnb, one of the few such medieval castles with such a distinction. For more information, visit tullauncastle.com.

5 Responses to “Clan Kennedy:
Of Presidents and Kings”