In the northeast corner of Missouri, 150 miles north of St. Louis and three miles west of the intersection of Highway 61 and State Route Z, an oak grove marks the turnoff to St. Patrick, a small unincorporated community with a rich Hibernian back-story. There, a stonework Irish round tower interrupts an otherwise verdant horizon. It belongs to the Shrine of St. Patrick, a 56-year-old medieval-inspired church. This may be the heart of Irish middle America.

The area was first settled as North Santa Fe in the early 1830s by Irish immigrants, who erected the first Church of St. Patrick from local timber in 1834. By 1857, the town was called St. Marysville and had grown large enough to warrant its own post office. This meant another name change because there was already a St. Marysville in Missouri. The priest at the Church of St. Patrick had emigrated from Donegal and suggested naming the town after the church, perhaps in an effort to highlight the parallel that, just as Catholicism had been brought early to Donegal by St. Patrick, Irish immigrants like himself had pioneered its presence in western America.

One hundred years later, the modern Shrine of St. Patrick was modeled after St. Patrick’s Church of Four Masters in County Donegal. Along with a reputation for St. Patrick’s Day reverie, the shrine has a grand central rose window depicting St. Patrick and the four provinces of Ireland, 37 other stained glass windows inspired by the Book of Kells, a relic of St. Patrick lain in the altar, and a flagstone from Croagh Patrick embedded in the floor of the altar. A statue of St. Patrick keeps vigil on a grassy knoll just outside the door.

The shrine owes its existence to Fr. Francis O’Duignan, who, local legend has it, upon arriving in St. Patrick in 1935, drove through the town before realizing he had passed his appointment. The town had replaced its original wood church with a more permanent brick structure in 1860, but by 1935 when Father Francis O’Duignan had to make a U-turn, it was barely standing. 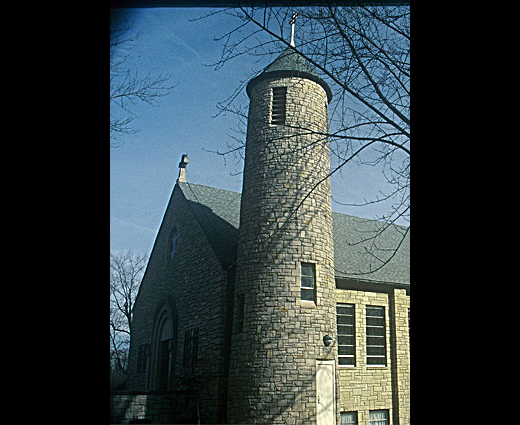 Born in County Longford in 1901, Fr. O’Duignan was familiar with grander churches and resolved that instead of simply repairing the existing building, he would construct a veritable shrine to the town’s namesake. He would honor St. Patrick’s Irish heritage and capitalize on its familiar name, continuing the tradition of entrepreneurial Irish immigrants.

Fr. O’Duignan knew that St. Patrick residents would not be able to afford such a construction project alone, so in 1936 he created a novel fundraising scheme. He and the postmaster created a new church seal and post office cancel stamp bearing a shamrock and the words, “St. Patrick Missouri: The Only One in the World,” and personally mailed 500 St. Patrick’s Day greetings and requests for assistance by thumbing through phone books of major American cities and addressing the cards to people with Irish surnames. It took 20 years, but the campaign finally generated enough money, and on St. Patrick’s Day 1957, the Shrine of St. Patrick was officially dedicated with Fr. O’Duignan officiating.

While St. Patrick currently has a population less than 20, St. Patrick’s Day brings an influx of visitors, and the month of March inundates the little town’s post office with thousands of letters from those wanting to participate in the 75-year long tradition of the shamrock cancel. St. Patrick had to receive special permission from the federal government to use the non-standard cancellation stamp, and it is only allowed between March 1 and 31.

Last year, 8,000 requests passed through the post office, and in previous years as many as 50,000 have arrived during March’s 31 days, according to Missouri’s Columbia Tribune. Thus, by the virtues of transcendental contact, the Shrine of St. Patrick in rural Missouri becomes one of the best attended St. Patrick’s Day celebrations in the United States.

If the cancel made St. Patrick, MO famous, the shrine made it a destination. The stained glass windows, manufactured specifically for the Shrine by the State Glass Company in Dublin, are a wonder, and St. Patrick’s Day brings leprechauns, prizes, Irish music, and traditional beef dinners to this special corner of rural Missouri.

To receive your own hand-canceled letter, with the seal of the Shrine of St. Patrick and Fr. O’Duignan’s cancel, send a self-addressed, stamped, envelope to Postmaster, St. Patrick, MO 63466 any year before March 31. ♦

10 Responses to “Irish in the Heartland:
St. Patrick, Missouri”

Leave a Reply to Peggy Ford-Claassen