The Heart of Hearts Rests in Dublin

Follow the signs to get to Dublin's Shrine of St. Valentine. (Photo: Skibbereen Eagle)

How the remains of  Saint Valentine came to be enshrined in a Dublin church.

On February 14 and in the days and weeks leading up to Valentine’s day (pre-pandemic) visitors would flock to the Carmelite Church on Whitefriar Street in Dublin to visit the shrine of St. Valentine.

The shrine consists of a life-size statue of St. Valentine standing on an altar, below which, lies a casket containing what is said to the remains of the martyred saint.

Once a year, on St. Valentine’s feast day, the reliquary (the container holding the remains) is placed before the church’s main altar for special Valentine’s day sermons, and a blessing of rings for those with upcoming weddings.

Churches in Rome, Terni, and Glasgow also claim to have the remains of St. Valentine enshrined. But Ireland’s claim is the only one certified by a pope. 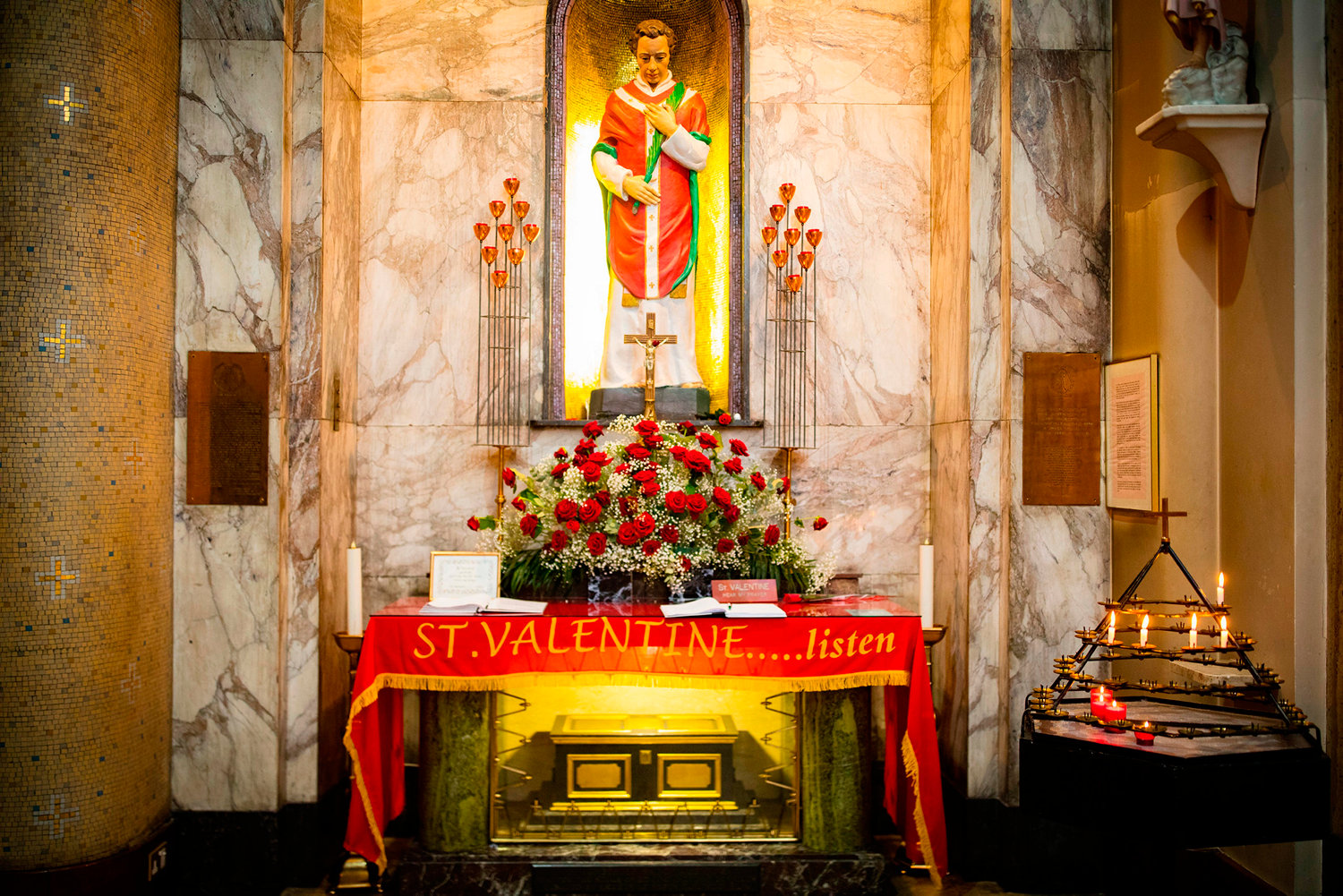 The shrine of St Valentine at Our Lady of Mount Carmel in Dublin. (Photo: Arthur Carron)

The reliquary, which Whitefriar Church acknowledges, may not contain all of St. Valentine’s remains, arrived in Dublin on November 10, 1836, in a wooden casket bearing Pope Gregory XVI’s coat of arms, and accompanied by a letter attesting to the contents of the casket.

The relic was given to the church following the 1835 visit of John Spratt to Rome.  Spratt, who was for many years was Provincial of the Carmelite Order in Ireland, was a fierce advocate for the poor and the disabled, and also a noted preacher.

While visiting Rome, Spratt was invited to speak at Rome’s Gesu Church, the  mother church of the Jesuits. His homily impressed the hierarchy, and Pope Gregory XVI, in admiration, is said to have given Spratt the reliquary of St. Valentine.

The letter, which accompanied the casket to Dublin is translated here from the Latin:

“We, Charles, by the divine mercy, Bishop of Sabina of the Holy Roman Church, Cardinal Odescalchi Arch Priest of the Sacred Liberian Basilica, Vicar General of our most Holy Father the Pope and Judge in Ordinary of the Roman Curia and of its Districts, etc, etc.

To all and everyone who shall inspect these our present letters, we certify and attest, that for the greater glory of the omnipotent God and veneration of his saints, we have freely given to the Very Reverend Father Spratt, Master of Sacred Theology of the Order of Calced Carmelites of the convent of that Order at Dublin, in Ireland, the blessed body of St Valentine, martyr, which we ourselves by the command of the most Holy Father Pope Gregory XVI on the 27th day of December 1835, have taken out of the cemetery of St Hippolytus in the Tiburtine Way, together with a small vessel tinged with his blood and have deposited them in a wooden case covered with painted paper, well closed, tied with a red silk ribbon and sealed with our seals and we have so delivered and consigned to him, and we have granted unto him power in the Lord, to the end that he may retain to himself, give to others, transmit beyond the city (Rome) and in any church, oratory or chapel, to expose and place the said blessed holy body for the public veneration of the faithful without, however, an Office and Mass, conformably to the decree of the Sacred Congregation of Rites, promulgated on the 11th day of August 1691.

In testimony whereof, these letters, testimonial subscribed with our hand, and sealed with our seal, we have directed to be expedited by the undersigned keeper of sacred relics.

One Response to “The Heart of Hearts Rests in Dublin”