For God and Country

Sinn Féin president Gerry Adams, William J. Flynn, and Edward Cardinal Egan following a visit by Adams to the U.S., where he addressed the National Committee on American Foreign Policy at a luncheon held at the Mutual of America building.

Edward Cardinal Egan, archbishop and cardinal of the archdiocese of New York, writes that Bill Flynn’s faith is as integral to who he is as his Irish heritage.

One rarely hears the phrase “For God and Country” anymore, but years ago it was seen as an excellent model for how young men and women should order their priorities in life. If a young person made serving God and following His commandments the first priority, then the second priority, service to the country, would inevitably follow, as that young person grew to be a responsible parent, a civic-minded neighbor, and conscientious citizen.

It is disappointing that such concepts are in some quarters thought out of date in today’s society, but it is encouraging to know that there are still people like my good friend Bill Flynn who have never lost that sense of duty and responsibility. Indeed, “For God and Country” can be fairly considered an apt summary of his life.

Having had the privilege of working closely with Bill over the years, I have seen that he is proud of and committed to his faith. Faith is not, however, something he wears on his shirtsleeve so that it may be admired by others. Rather, it is an integral part of the man, as much a part of who he is as his Irish heritage. Both are of the essence of how he lives his life.

Bill is much more than a Sunday morning Catholic, as he strives to understand his faith and put it into practice. He is wonderfully well read, studies the teachings of the Church with intensity, and looks forward to those occasions when he can discuss a point of theology with me or another clergyman. His faith is deep and made all the stronger by his passion for learning.

As a young man Bill attended the seminary and thought very seriously of pursuing a vocation to the priesthood. Although he ultimately decided that God was calling him elsewhere, this foundation has helped to guide Bill, both as he reared his own family and throughout his career as he became a most successful businessman; and it has earned him the respect of all who know him. To this day, Bill remains in touch with friends and classmates from his seminary days, enjoying the opportunity for discussion about the Church’s role in modern day society. Throughout his adult life, he has always made himself available to support the Church including service as Chairman of the Knights of Malta and a founding member of the Pope John Paul II Vatican Museum on the grounds of Catholic University in Washington.

After leaving the seminary, Bill joined the United States Army Air Corps. His love of country and respect for the men and women of the United States military stayed with him long after his service was completed. In later life, Bill became closely associated with the U.S. Army War College in Carlisle, Pennsylvania, and arranged for many of Mutual of America’s officers to have an opportunity to become familiar with the leadership of our military by attending the National Security Seminar at the War College. Bill was eventually asked to serve as a member of the U.S. Army War College Foundation, and this he did for several years. Upon his retirement from Mutual of America, his successor, Tom Moran, and the Board of Directors of Mutual of America decided to honor Bill by donating to the U.S. Army War College the funds necessary to create, in Bill’s honor, the Omar N. Bradley Chair in Strategic Leadership. Bill is known to quote another great General, Norman Schwarzkopf, Jr., who said, “Leadership is character and competence. If you can only have one, opt for character.” Bill Flynn is one of those rare individuals who actually has lived his life with both character and competence.

It was while Bill Flynn was in the Army that he married his dear wife, Peggy. Together they instilled in their children an understanding of the importance of a loving family and faith in God. During those early years of married life, Bill became a teacher, once again seeking to serve the Lord through his service to his students. Bill understood the importance of a good education and shared his passion for learning with his students, just as he did with his own children. Bill Flynn is rightfully proud of his family and has taught them by example that even in the most difficult of times some comfort is to be found in prayer and that it is ultimately our faith that sustains us. 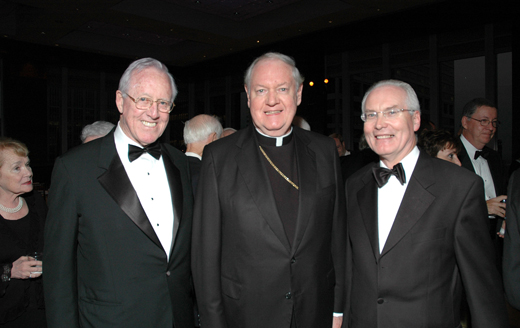 Bill was also a marvelously successful business leader, serving for many years as the President of the Mutual of America Life Insurance Company. He always understood the potential and importance of Mutual of America as a provider of pension services to more than 15,000 charities across the country, so that individuals who worked to improve society might be able to retire with dignity.   This is yet another example of Bill Flynn’s service to others. While Bill continues to serve the company whenever and however he is needed, he made certain that the good work he began would continue after his retirement, but choosing and mentoring a successor, Tom Moran, who not only has carried on Bill’s work but has done so fully aware of the need to lead with both character and competence.

However, it is without question that Bill Flynn will always be especially remembered for his role in helping to bring peace to Northern Ireland. He has often told how his own involvement in seeking peace began when two friends approached him about helping them to raise money for the IRA. He knew that sending money to continue fighting was not and could never be a solution that would lead to peace. Thus, that very day he made a decision to do whatever he could to help find a path to peace. Once again, he turned to his friends in the Catholic community and sought the assistance of Sister Dorothy Ann Kelly, President of the College of New Rochelle, and the U.S. Director of the Peace People, an organization formed by two women in Northern Ireland who won the Nobel Peace Prize for their work. Bill Flynn literally walked the streets of Northern Ireland with Sister Dorothy Ann Kelly, seeking to learn from anyone and everyone who would speak to him and always seeking to be accurately informed.   With those first conversations, it became clear that a new direction was needed, and Bill decided that he would work to try and find that new direction. From that time onward, he was tireless in his efforts, bringing every political group to New York to speak in front of a gathering of the National Committee on American Foreign Policy, of which he is Chairman. When he was not bringing the leaders to New York, he and his small group of interested friends were traveling to Belfast to meet with politicians and paramilitaries from both sides. He was the only person to be in attendance as a witness at both the IRA and Loyalist ceasefire announcements.   Those that had once criticized him for getting involved in a conflict that had no solution quickly reversed themselves and became his strongest admirers. It is no small surprise that Bill Flynn is universally recognized as one of the most influential Americans in making peace a reality.

I am proud to call Bill Flynn my friend. It is my hope that many more will emulate his life of service and commitment to helping others, and that they too will discover the beauty to be found in the simple truth of living one’s life “For God and Country.” ♦

Window on the Past:
A Savior of History

John Gilmary Shea preserved much of the existing knowledge of the beginnings of American...