A Man for All Seasons

Bill Flynn and his longtime friend, Rev. Joseph O'Hare, at the dedication of the William J. Flynn Room at the Mutual of America building.

On September 21, 2005, Mutual of America dedicated a room in Bill Flynn’s. Rev Joe O’Hare, an old friend, marked the occasion with the following remarks.

I have always admired Bill from the first days we served on the Board of the College of New Rochelle, and I appreciated his counsel when he served as a Trustee of Fordham University.

I admired his pioneering work in developing the initiatives that led to the Good Friday Agreement in Ireland and the possibility of a path to peace in Northern Ireland.

Bill exemplifies many of the characteristics of a leader, which is why the naming of this Center is so appropriate.

It seems to me that Bill combines several traits that are critical to leadership. He is loyal and dedicated to his own personal, family, national and religious traditions, but he is also able to reach across borders to others of different traditions and find common cause with them. Similarly, he is respectful of the past and the origins of our deepest commitments, but he is also sensitive to new challenges, able to recognize the pertinence of new questions, willing to question established ways of doing things, if more promising ways seem possible, whether this be the protocols for the St. Patrick’s Day Parade or the need to listen to uncomfortable opinions in our own religious family. 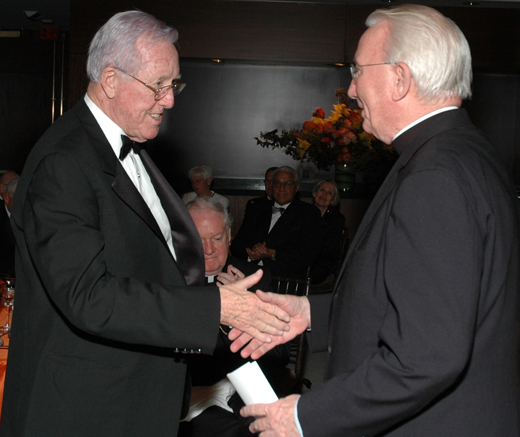 Flynn and O’Hare greet each other.

He is a wonderful companion at a meal or a party; he is also a source of strength in times of testing and tragedy.

This is a season when there seems to be a crisis of confidence in many of our leaders and institutions: corporate leaders who have deceived the public and indulged their own extravagant tastes; political leaders whose views seem dictated by spin doctors and focus groups; journalists in print or television who seem indifferent to any claim of personal privacy and hardened to the human consequences of their preoccupation with sensationalism.

We need people and institutions we can trust.

Bill Flynn is and has been a man for all seasons. But he is most especially a man for this season, when we have been too often disappointed in our leaders, in government, in the corporate world and even in our church. We recognize in Bill Flynn a leader we can trust, and for this we are most grateful.