These photographs of my grandfather, Sgt. Earl K. Giffin, and his sister, Lt. Gladys Giffin, were taken in Paris after the city was liberated during World War II. Both Earl and Gladys had been serving in Europe since June of 1944, and were eventually reunited in Paris. 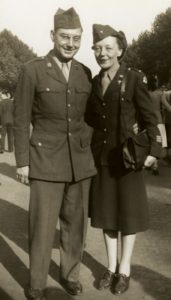 Raised in Plattsburgh, NY, they were two of Mr. and Mrs. G.H. Giffin’s thirteen children. The Giffin family descended from William Giffin, who immigrated to North America from County Wexford in 1798. William married Tamasin Eyre, also from Wexford. The couple had a son, John Henry Giffin, who married another first-generation Irish-American by the name of Mary Anne White. Mary Anne’s parents,

George White and Mary Rowsome, were both from Omagh, County Tyrone.

Most of the Giffin clan has since migrated to the southern U.S., but our hearts will always be in New York.
Submitted by Scott Carter (Mother’s maiden name: Giffin) Atlanta, Georgia. ♦