Dennis Purcell never had a mind to go into the life science industry, but the businessman, who has a BS in accounting and economics from the University of Delaware and an MBA from Harvard, was inspired to head in that direction more by accident than design.

“About 15 years ago, I was in general investment banking and I had a tumor in my arm. I started to see the health care industry up close and personal. That really got me interested in bio-technology, and what was happening in bio-technology, so I started to refocus my career there,” he told Irish America over the phone. For someone who enjoyed a record-breaking college basketball career (Purcell holds the free throw completion record (84 percent) at the University of Delaware. In the 1974-75 season he made 94 percent of his free throws), such an injury must have been devastating, but Purcell made it the starting block for a hugely successful career.

Following surgery and a full recovery, he refocused with gusto. After working as Managing Director in the Healthcare Group at PaineWebber, Inc.. Purcell joined Hambrecht & Quist. Under his leadership. H&Q was the leading underwriter of life sciences securities from 1995 through 1998, with over $10 billion investment in the area.

The unwavering belief Purcell showed by investing resources into the life science industry led Genetic Engineering News to induct him into their Biotech Hall of Famein 1998 – the first investment banker to be bestowed the honor. The following year he was named to the biotechnology All Stars list by Forbes.

“A typical investment is between 15 and 20 million dollars. If we see promising technology with promising management teams, we will invest and sit on the board, and advise not only on future financing but also on the strategy of the company.”

Purcell explains the reason for the company’s name change. “People were asking what was behind our success, and I said. Well, we have pretty good vision.’ We looked up different meanings for the word vision, and came across the Irish word Aisling.” (There is an increasing trend among U.S. companies to incorporate Gaelic names and terms in their titles: Aisling Capital. Aon Corporation (Aon is Gaelic for One). Shamrock Acquisitions and Mayo Group, to name but a few.)

Purcell is a second-generation IrishAmerican, whose four grandparents came from Ireland. His mother’s parents immigrated from Strabene, County Tyrone, and his father’s from Callan, County Kilkenny. Growing up in Philadelphia, Purcell was used Io hearing about the land of his grandparents, “The influence was very strong and still is Io this day. A lot of it had to do with family and history. We have a very large family and the Irish influence was very pervasive,” he says.

Purcell is married to Leslie, and they have four children whose names reveal more than a hint of this proud family heritage. Colleen, the oldest at 21, is a senior at Yale in Pre-med, and Elizabeth, 19, is a sophomore in government studies at Harvard. Denny is 16 and Margaret is 12. 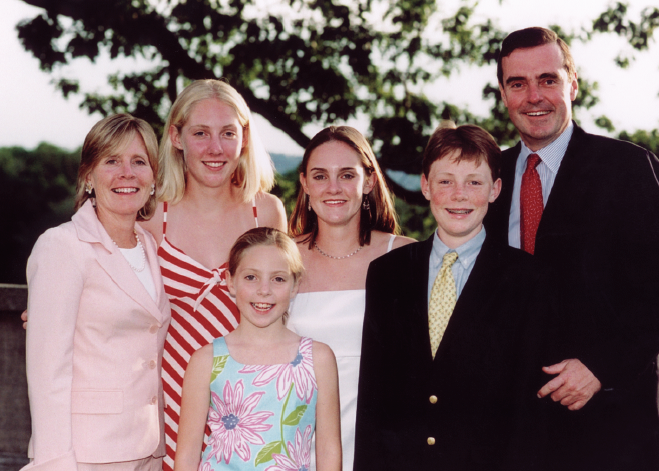 Being such a respected leader in his field, Purcell spends between 10-20 percent of his time giving talks to venture capitalists and meeting with organizations from all over the globe, advising on financing and Strategy tor biopharmaceutical and life science producís. This has led him to give talks to Irish venture cap- italists. and signs are that Ireland is trying to improve and develop its biotech industry and is catching up fast with the rest of the world.

“Ireland is becoming much more important recently and I have spent some time with the Irish venture capitalists and organizations like Biolink USA/ Ireland, both of whom are working hard to try and lind the components necessary to have a successful industry. What the Irish industry is trying to do is to build up a critical mass of companies, management teams. and capital,” said Purcell.

“To have a successful industry you need to have this critical mass and infrastructure. One of the positives about Ireland right now is that so many of the large pharmaceutical companies are there.

“Another big positive is that an education system is in place, because a lot of these companies are the ones that co-develop the products and help the biotech industry.

Working in an industry whose very core product can help improve and extend life. there are companies that Aisling Capital have invested in that have special meaning Io Purcell. One of those companies is a U.K. company called Bioenvision.

Other companies he has high hopes for include Armgo, which has a new treatment for heart failure, and Sempra, which has new novel treatments for anti-infectives.

Earlier this year. Aisling Capital invested in The Natural Dentist – a company that looks at how the way oral health can affect systemic health.

“Part of our fund is going to that health and wellness space. We look for companies where life science meets lifestyle, and this [The Natural Denlist| has actual clinical data behind it. This is a very big area for the pharmaceutical industry.”