U2 Win Big at Grammys 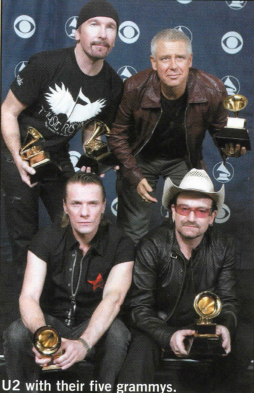 U2 was the big winner at the 48th Annual Grammy Awards, held February 8, 2006. The Irish supergroup won all five awards for which they were nominated, including Album of the Year for How to Dismantle an Atomic Bomb. In winning five awards the band edged out favorites Mariah Carey. whose comeback album The Emancipation of Mimi has sold over 11 million copies worldwide, and rapper/producer Kanye West, who like Carey won three awards. This year’s Grammy wins for U2 come in addition to the three awards they won at the 2005 Awards for their hit single “Vertigo.” That song is actually from How to Dismantle an Atomic Bomb, but was released as a single months before the full album came out. In addition to their win for Album of the Year, U2 won Best Rock Song for “City of Blinding Lights,” while “Sometimes You Can’t Make it on Your Own” won for Best Rock Vocal and Song of the Year. U2 also won Best Rock Album. This year’s awards bring U2’s career Grammy wins to twenty-one.

U2 has sold over 120 million records worldwide during their twenty-five year career. How to Dismantle an Atomic Bomb was originally conceived as a pure rock-n-roll album, but went through many revisions before its release in November 2004. A large part of the inspiration for the album came from the death of Bono’s father. Bob Hewson, in 2001. “Nothing like bereavement to keep the heart porous.” Bono told Edna Gunderson of USA Today just before the album’s release. “It’s hardness of the heart that can close down a writer.” Bono paid tribute to his father after the band accepted the award for Song of the Year saying, “Actually I was talking about my father Bob. He was the atomic bomb in question. I wanna thank my father Bob for giving me the voice and a bit of attitude to use it.” U2 is currently traveling on their world “Vertigo” tour. ♦