An illustration of Irish Americans parading a bust of Daniel O'Connell through the streets of New York City, 1874.

The long and sometimes glorious history of celebrating St. Patrick’s Day in America.

How would you like to celebrate St. Maewyn’s Day?

After all, the man we know today as St. Patrick was born Maewyn Succat. Only later was his name Romanized to Patricus.

Indeed, when you begin to explore the origins and evolution of St. Patrick’s Day – and the big New York parade that comes with it – historical oddities such as this are plentiful.

First of all, this most Irish of holidays is named for a fellow who was actually born in Britain. Back in the late 300s the pagan Celts engaged in the barbaric act of slavery. That’s how young St. Patrick made his way to Ireland.

A lonely and isolated slave, he began talking to God and was compelled to convert the pagans to Christianity, driving the proverbial snakes from Ireland and transforming the island into a Christian nation.

Meanwhile, though St. Patrick’s Day has always been celebrated in Ireland, it was not until the Irish came to the New World that the holiday began to take the shape we know today.

So how did this holiday evolve? How did the parades become so popular? And how did a celebration of Irish ethnic identity become so tangled up in the political events of the day, from the American Revolution right up to debates revolving around gays and lesbians in the 1990s?

St. Patrick’s Day marks the death, rather than the birth, of Ireland’s patron saint. The holiday, which falls during the season of Lent, was traditionally marked in Ireland by a church visit in the morning and a feast later in the day. Lenten restrictions against meats and revelry would often be lifted.

The first known marking of St. Patrick’s Day in the U.S. took place in Boston in 1737 according to John T. Ridge, an Irish American historian who, in 1988, wrote a year-by-year account of the St. Patrick’s Day Parade in New York City.

“The Irish Charitable Society in Boston marked (the holiday) with a dinner,” says Ridge, who is also a member of the New York Irish History Roundtable.

The dinner, attended by a mix of Catholic and Protestant Irish, became an annual affair.

It was not until the 176Os, when America was still a British colony, that New York City added the element of a parade to the March 17 event. Military bands – ironically, members of the British army who were of Irish descent – would participate in what most agree were largely informal processions which would often conclude at a tavern, where food and drink were served up. Some say these early St. Patrick’s Day gatherings were not unlike processions that marked religious feasts throughout Europe.

One factor, however, would ultimately make the St. Patrick’s Day holiday a grander affair. The Irish kept on coming to America.

By 1762, the Irish presence in America was already so strong that New York’s first official St. Patrick’s Day Parade was held. As many as 10,000 Irish were coming to the U.S. annually prior to the 1776 Declaration of Independence, a document which, fittingly, was printed by a successful immigrant from County Tyrone, John Dunlap.

Even war between the U.S. and Britain did not stop the 1779 Paddy’s Day parade in New York.

“Lord Rawdon, an Irish-born colonel in the king’s forces, led a march of his four hundred Volunteers of Ireland soldiers (New York Irishmen enrolled in the British service) from lower Broadway to the Bowery, where they crowded into a tavern tor a Saint Patrick’s Day dinner,” Joe McCarthy wrote in a 1969 American Heritage article about the holiday. He continues, “Lord Rawdon’s hospitality failed to pay off: many of the volunteers later deserted and went over to Washington’s army.”

Following the Revolution, as the Irish presence in America grew, so did the number of charitable groups for Irish immigrants.

Perhaps the most prominent was the Friendly Sons of St. Patrick, which had chapters in cities such as New York and Philadelphia.

Though heavily Protestant, many Friendly Sons held deep anti-British sentiment, for it was the Brits who forced many of these immigrants to come to the New World.

This created serious tension between New Yorkers of British and Irish descent.

So, by the early 180Os there was already a vaguely political edge to the St. Patrick’s Day Parade. New Yorkers of British descent would mock the Irish during parades, torching effigies of St. Patrick. This only pushed the marchers to wear the ethnicity on their sleeves even more proudly.

By the 183Os there were enough Irish militia groups to move the parade route uptown. According to McCarthy, the 90-minute procession crossed Twenty-third Street from Third Avenue to Eighth Avenue and circled back to City Hall. The Irish, after all, wanted city power brokers to witness their growing clout. Indeed, the mayor of the city traditionally viewed the parade here before it met up with Archbishop John Hughes at the old St. Patrick’s Cathedral on Prince Street.

Times, of course, grew tougher in Ireland during the 183Os and 184Os. In the black year of 1847. most St. Patrick’s Day dinners in New York were cancelled. The funds for such events, instead, were sent to Ireland for relief, according to Ridge.

Around this time The Ancient Order of Hibernians was formed in the U.S. The AOH would profoundly transform the New York St. Patrick’s Day parade.

“It was the Hibernians who in 1838 took over the management of the Saint Patrick’s Day parade and converted it from a rough and informal social outing to a large, well-organized civil rights demonstration,” McCarthy writes.

AOH Deputy National Historian Gerry Curran has written about the sometimes bloody parades of the 185Os. and the vital role the AOH and other Irish-American groups played in protecting Irish immigrants from bigots.

“During the July 4. 1853 Independence Day Parade in New York, members of the AOH were attacked at Abingdon Square when a wagon and team of horses were driven into the marchers and bloody fighting broke out between the Hibernians and elements of the “Know Nothing’ organizations led by the shameful bigot Bill Poole.” Curran writes of the infamous anti-Irish bigot made famous by Daniel Day-Lewis in Martin Scorsese’s movie Gangs of New York.

Curran continues: “With ‘Know Nothing’ attack a genuine threat, an unusually large number of Irish units of the state militia, including the 69th. the 9th. and the 72nd regiments, as well as many volunteer units, acted as escort to the parade on the following March 17th. Protection of their community in general, and of the marchers in particular, motivated these men (many of whom were A.O.H. members). Their demeanor stood in striking contrast to the proverbial Irish faults of violence, indolence, and intemperance with which the popular media of the time portrayed them. The inclusion of these military units helped transform the St. Patrick’s Day procession into the parade we recognize today.”

The 1850s also saw another important development: Grand Marshals, who had been selected sporadically in earlier years, were now named annually. 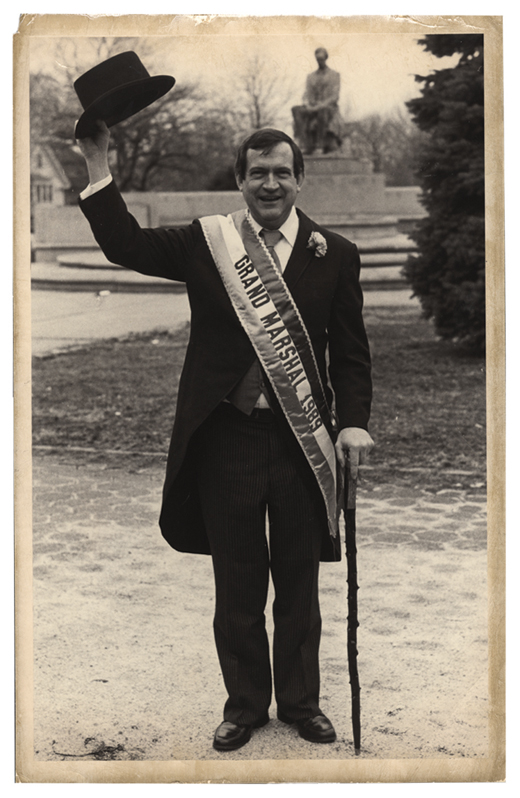 In 1857. opposition to the St. Patrick’s Day Parade came from a surprising corner: Irish-Americans themselves. An editorial in the Irish American newspaper suggested a more religious observation might be more appropriate than a parade. Similar arguments would be made by Church leaders in later years.

Around the same time, the many Irish groups who participated in the parade’s leadership could not agree on procedure. One year there were actually two separate parades on the same exact route, one right after the other.

That did not stop the Irish from coming to see the parade. As many as 20,000 people marched through the muddy streets of Manhattan by the end of the U.S. Civil War, March 17. 1865.

By now. the pattern for the modem St. Patrick’s Day Parade was more or less set.

The city could expect large numbers of marchers and observers, as well as political tension and controversy.

The early 187Os parades were tinged by Protestant-Catholic tension. Those were the years when the deadly Orange Riots took place following the traditional New York Protestant marches on July 12. Many feared the violence would spill over to the March 17 parade.

Other tensions were inevitable. Spats about whether or not the Irish flag should be flown at City Hall on St. Patrick’s Day were common in the 188Os and 189Os. Numerous years, there were even separate parades because of in-fighting among the city’s Irish.

But there were also memorable moments. The new St. Patrick’s Cathedral opened officially in 1879 at 50th Street and 5th Avenue, thus making the passing in front of this Irish Catholic landmark a parade high point.

The Gaelic revival, and the ensuing years of rebellion, martyrdom and war in Ireland that marked the start of the 20th century, tied the St. Patrick’s Day Parade ever more closely to Irish culture and politics. This tapped local Irish pride but also created divisions in the U.S.

Factions of the Irish community boycotted the parade completely during the Irish Civil War of the 1920s. “A Long Way to Tipperary” was even banned on the parade route. The tune was seen as a recruiting tool for British soldiers during World War I.

But just like today, such controversies never drove all of the Irish away. On the eve of the second World War in the 193Os, crowds viewing the big Manhattan parade approached one million.

In 1948, Harry Truman – an old pal of Irish Kansas City boss Tom Pendergast became the first president to visit the parade. One year later the parade was broadcast on TV for the first time.

With the boom in air travel, the 1950s linked Ireland and New York even more closely.

Therefore it’s not surprising that when the Northern Ireland “troubles” erupted again in the late 1960s, they were front and center at the parade. Many marchers wore black armbands to show their solidarity with Catholics in the six counties of the north.

Meanwhile, although the media has always been quick to exploit stereotypes about Irish drinking and violence, rowdy youths at the parade were becoming a real problem, and would remain so until the 1990s. That’s also when a new peace in Northern Ireland, rather than violence, was celebrated along Fifth Avenue.

So. when you hear someone complain that the parade should be about fun and celebrating the Irish, not politics, you might want to tell them: “The parade has always been about politics.”

You might even say that’s why the Irish marched in the first place. ♦

One Response to “The St. Patrick’s Day Parade”