Denis Leary will appear in the new FX series Rescue Me.

When it comes to film festivals, the biggest news of the year has been Michael’s Moore’s big win of the Palme d’Or at Cannes for Fahrenheit 9/11, his controversial documentary on President George W. Bush

Moore has always worn his Irish-American roots proudly on his sleeve, going so far as to say they played a role in his desire to question authority. A recent New Yorker magazine profile of Moore was particularly intriguing when it depicted the best-selling author and filmmaker talking before a crowd in Liverpool, that famous Irish city in England.

But because Moore has been dominating the spotlight, lots of other Irish movie activity at festivals across the U.S. has gone unnoticed. Some of the movies have been seen already, but others are exciting projects to keep a look out for. 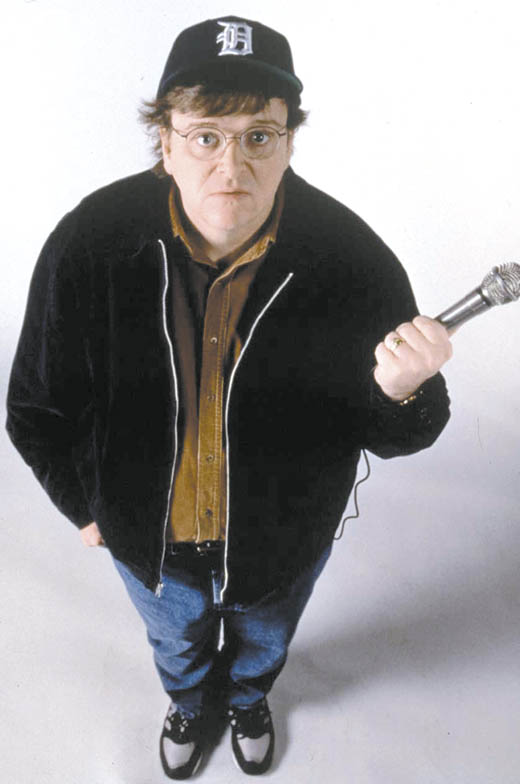 Michael Moore takes on President Bush in Fahrenheit 9/11, which was a winner at Cannes.

At Robert DeNiro’s Tribeca Film Festival back in May, there was an impressive amount of Irish talent on display.

First up was Irish-American actor/director Ed Burns trying to get his career back on track with Looking for Kitty. Directed by and starring Burns, Kitty is the story of a high school baseball coach (David Krunholtz) and a down-on-his-luck private investigator (Burns) who searches New York for the coach’s wife, who has taken off with a fading rock star.

Then there was the highly praised Blind Flight. In this drama, an Irish nationalist (Ian Hart) and an English journalist (Linus Roache) forge an unlikely bond as they are held captive for nearly five years in Beirut. Based on actual events, Blind Flight was directed by John Furse.

In fact, Ian Hart (who, coincidentally, is from Liverpool, with deep Irish roots) won the Best Actor in a Narrative Feature Film Award for his performance in Blind Flight at the third annual Tribeca fest. 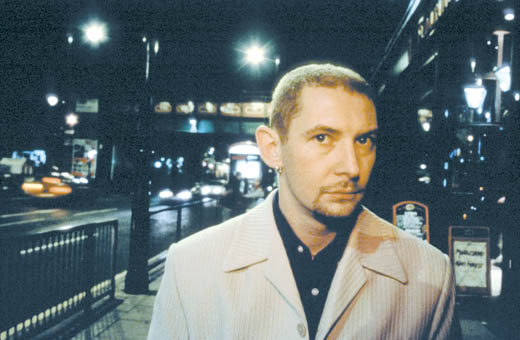 Also screened at Tribeca was An Unreliable Witness, the latest movie to explore the events surrounding Bloody Sunday in 1972. Thirty years later, in the film, journalist and eyewitness David Tereshchuk travels back to Northern Ireland to testify as part of an inquiry into the tragedy. (You may remember that Tereshchuk wrote about his experiences in Irish America).

The documentary, directed by Michael McHugh, explores Tereshchuk’s involvement in, and memory of, this seminal event in the North.

Also shown during the festival was Brotherhood, a documentary about the FDNY which features unprecedented access to various firehouses in Brooklyn, Queens and Manhattan loaded with Irish-American firefighters.

Meanwhile, Irish talent old and new, with indy flavor or Hollywood hype, was offered up at April’s Philadelphia Film Festival.

The highest profile Irish film to be shown during fest was Laws of Attraction, Pierce Brosnan’s latest. Set in New York City and Ireland, Brosnan stars alongside Julianne Moore in what was described as a romantic comedy in the Spencer Tracy-Katharine Hepburn tradition. The stars play dueling lawyers who also end up entangled romantically, but the film didn’t fare well at the box office.

Perhaps the film at the other end of the hype scale, a small Irish independent film called Cowboys & Angels, will fare better when it is released later this year.

The coming-of-age tale follows two best friends in Ireland — one gay, one straight — as their worlds change, and they move from the uncomplicated travails of youth to the very messy complications of adults.

Cowboys & Angels was written and directed by David Gleeson. It’s his feature film debut. It won the Best Screenplay Award at the Newport Beach Film Festival this year, and is expected to hit select theaters in the fall. 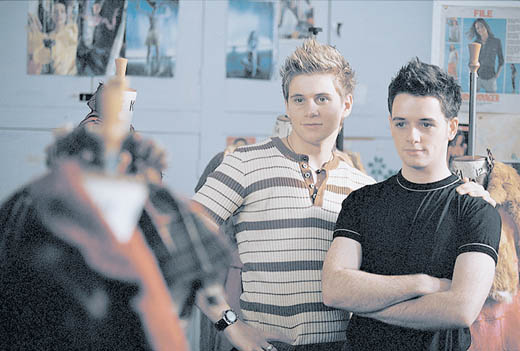 The movie Cowboys & Angels will be released in the fall.

Finally, at the Philly Fest, there was Shade, starting Dublin actor Stuart Townsend, as well as Irish film veteran Gabriel Byrne. The film is set in the world of high-stakes poker playing, and tells the story of three con-men looking for one more big score which would allow them all to retire.

Shade has a high-profile cast. Besides Townsend and Byrne, there are Sylvester Stallone, Thandie Newton, Jamie Foxx, Melanie Griffith and Hal Holbrook.

However, the buzz on Shade has been quite tepid. This is just the latest tough break for both Townsend and Byrne.

Townsend, of course, is dating Charlize Theron, who recently won an Oscar for her role in Monster. The eyes of the entertainment world are very much upon her to see what she does next.

For Townsend, however, things have not gone so well.

He was solid in the Irish film About Adam but that didn’t get a very wide release. He famously lost out on a big role in the Lord of the Rings series, and his only other notable film, Queen of the Damned, made it to theaters simply because the film’s other star, Alliyah, had died in a plane crash.

Byrne’s career has also cooled off considerably, following roles in hits such as The Usual Suspects, and a big turn on Broadway in Eugene O’Neill’s Moon for the Misbegotten.

Still, Shade apparently has enough going for it to earn a theatrical release, rather than a straight-to-video deal, of which there was much talk.

English actress Samantha Morton apparently enjoyed playing an Irish immigrant in In America so much she has decided to head over to Ireland for her next film.

Morton, who received a Best Actress Oscar nomination for playing the harried wife and mother of an immigrant family in New York, will star in a comedy called Farmers on E.

The film, which also stars Robert Carlyle, will be shot in Ireland and revolves around a community of rural residents asked to turn their farms into a theme park. The film will begin shooting in September.

As with Morton, Carlyle (a Scotsman) has also apparently taken a liking to playing Irish characters.

Carlyle (best known for roles in Trainspotting and The Full Monty) just finished shooting a film in Belfast with X-Files star Gillian Anderson. The film will be titled The Mighty Celt.

The Mighty Celt was written and directed by Pearse Elliott, and delves into the world of IRA operatives. It also becomes clear, as the film progresses, that Anderson and Carlyle’s characters have a long personal history.

Around St. Patrick’s Day next year, look for Russell Crowe to be starring in a movie about famed New York Irish boxer James J. Braddock.

The film, directed by Ron Howard, will be called Cinderella Man, and will recount the Depression-era life and times of the famed boxer who was seen as more or less a loser until be beat the feared Max Baer in 1935. The film’s title itself is an allusion to Braddock’s wild career. He was such an underdog in the battle against Baer that legendary journalist Damon Runyon dubbed Braddock the “Cinderella Man” after he won the heavyweight title.

Braddock was a heavyweight from the get-go. One of seven children raised by Joseph Braddock and Irish immigrant Elizabeth O’Toole on Manhattan’s West Side, Braddock was said to be 17 pounds at birth.

Finally, on the TV front there is good and bad news for Irish American talent. Perhaps most disappointing, ABC TV has canceled Bonnie Hunt’s idiosyncratic show Life With Bonnie.

But there is an Irish flavor here this summer. Starting July 21, The FX channel will present Denis Leary in a 13-episode FDNY drama called Rescue Me. Also starring in the show, set amidst the anxieties of a post 9/11 fire-house, is Jack McGee, himself not only an Irish American but one who served 10 years on the FDNY.

And proving once again that the Kennedy clan can always be called upon, the WB network will present Jack & Bobby, about the boyhoods of JFK and RFK. One can only speculate just how authentic the show’s depiction of the brothers (Bobby was generally seen as the more “Irish Catholic” of the brothers) will be. ♦