Irish Companies Thrive in the U.S.

Orbiscom's Dublin headquarters, where the technology company has been developing its security software.

Since we published last year’s Wall Street 50 issue and highlighted some homegrown Irish technology businesses, many of them have been cementing their Stateside success. Even in the economic downturn and technology bust, these companies have thrived.

Another thing they have in common is that they rely on Enterprise Ireland, an Irish Government agency charged with assisting the development of Irish enterprise. Enterprise Ireland’s core mission is to work in partnership with client companies to develop a sustainable competitive advantage, leading to a significant increase in profitable sales, exports and employment. Here is a snapshot of some of the most innovative Irish businesses providing technology to the finance and other industries.

WBT Systems is sewing up the market in the e-learning space. Its software platform, called TopClass, runs the technology that helps large companies train their employees. TopClass manages all the content and tracks the progress that employees are making in their training programs. Companies like Ryanair use TopClass for pilot certification, and the company has many customers in the financial services field including CSFB (Credit Suisse First Boston) and the UK bank Allfirst.

WBT Systems has been recognized in Ireland as an outstanding business; this year it won the Company of the Year Award at Ireland’s annual ICT Excellence Awards, beating out over 100 other applicant companies in the software, information technology and communications sectors. Duncan Lennox, CTO WBT Systems, said, “We are one of a few e-learning companies that is profitable. We had 40 percent revenue growth last year and we’re on target for the same revenue growth this year. And 40 percent of our revenues are from the U.S. market.”

Another Irish company that currently derives 40 percent of its sales from the U.S. market is Norkom Technologies. This year a host of new financial services firms signed up for Norkom’s anti-money-laundering software and fraud and risk management applications including HSBC Group, Bank of Montreal Group, and AIB Group. With Norkom’s products, these banks are better able to detect fraud and analyze user behavior — a vital function in this era of corporate greed and scandals. With a growing U.S. base in Boston, Norkom’s slogan is “from analysis to action” indicating the thorough job that its products perform.

Norkom is not the only Irish software company that monitors employees to ensure that they are doing their job properly. Performix Technologies monitors agents at call centers to help improve the profitability of the company by running its employee performance management software on their computers. This year, Performix raised more than $10 million in investment funding proving that many in the industry believe in its products. The company’s customer base now includes five of the world’s top 10 banks, two of the world’s top three credit card providers and two of world’s top telecommunication companies. Said Cathal McGloin, President and CEO of Performix Technologies, “Our focus is on employees; our impact is on the balance sheet.” 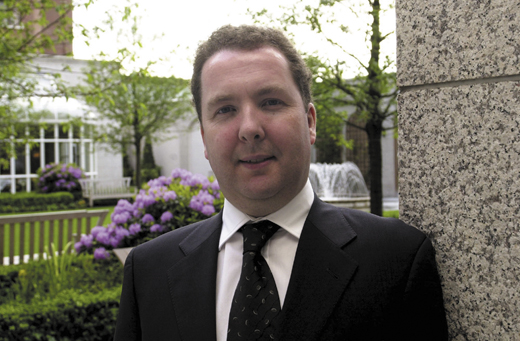 Also working in the competitive and complicated field of finance and hightech is Irish management and technology consulting company VISION. With clients including Citibank, General Motors and Warner Music Group, VISION is sharing its expertise in helping the financial sector boost growth through technology. VISION has provided essential systems integration work for banks during their mergers and acquisitions. The company’s pipeline for new contracts is up 100 percent this year and it has recently secured two new contracts in the New York City region.

This year banks and websites have embraced solutions from Orbiscom, an Irish security software company. With identity theft on the rise, particularly on the internet, Orbiscom offers one of the best ways to make online shopping safe.

Orbiscom’s technology hides your credit card number when you’re making an online transaction so cyber thieves and fraudsters can’t get a hold of your real details. The system creates a `one time use’ credit card number and expiration date that are disposed of after the purchase of the goods, so that the customers’ real details remain a secret. The clever idea was conceived of by Irishmen Ian Flitcroft and Graham O’Donnell when they were waiting out a storm in a sailboat off the west coast of Ireland in 1997.

Today the technology is used by companies including Discover, MBNA and Citibank. These three credit card providers were commended for their online shopping security this year by the Credit Card Monitor Report — proving how well Orbiscom’s technology works. ♦