A sampling of the latest Irish books.

Before Emmett Till was killed in Mississippi in 1955 for being black, and before Leo Frank was lynched in Atlanta in 1913 for being Jewish, two Irish Catholic immigrants in Boston, in 1805, were victims of an angry city.

Dominic Daley and James Halligan were traveling from Boston to New York City. Around this time, a man named Marcus Lyon was robbed and murdered along the path traveled by Daley and Halligan.

The two Irishmen denied any wrongdoing, but were swiftly arrested anyway and accused of murder. They spent five months in jail and were not allowed to see a lawyer until days before their murder trial began.

This miscarriage of justice is the subject of a riveting new novel called The Garden of Martyrs by Michael C. White. 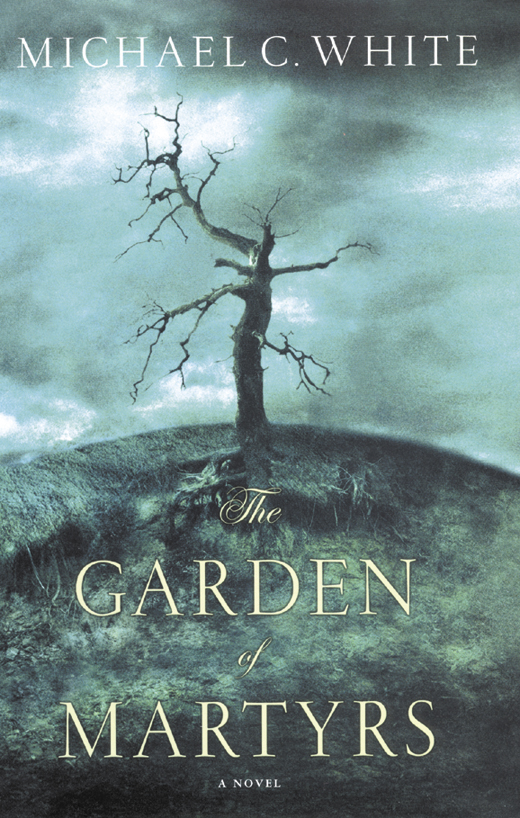 The Garden of Martyrs, by Michael C. White.

White teaches at Fairfield University and is the author of three novels, including A Brother’s Blood, another historical novel revolving around murder which was named a New York Times “notable book” when it was released in 1997.

In The Garden of Martyrs, the trial of Daley and Halligan is depicted as a grave miscarriage of justice (it lasted only one day) which grew out of grave hatred of Irish immigrants in this Yankee stronghold.

The men were sentenced to be hanged. The presiding judge wanted “their bodies dissected and anatomized.”

White (who lives in Massachusetts with his wife and two children) sets the stage brilliantly, capturing the anti-Irish prejudices of the era, but not in the heavy-handed way of some historical novels.

Equally important is the anti-Catholic nature of New England at this time. White uses the character of a tortured priest to explore this dimension of the stow.

Father Chervus was one of only two Roman Catholic priests in all of New England at the time, according to White. He had already faced persecution, having escaped the Terror of the French Revolution. Chervus sets out to comfort the wrongly accused and ultimately doomed Irishmen.

Through this device we get to know more about the immigrants at the center of this American tragedy.

Daley was a family man while Halligan was a more colorful, eccentric fellow. Despite their differences, however, they face their deaths bravely.

All three of White’s characters actually lived this nightmare. In fact, it was not until 1984 that the men were exonerated, by then Massachusetts governor Michael Dukakis. March 18 of that year was even proclaimed Dominic Daley and James Halligan Memorial Day.

Michael White deserves credit for revisiting an episode in Irish American history which is disturbing and revealing, and one which might even seem relevant today, as issues of religion and immigration continue to dominate America’s political culture. ($24.95 / 359 pages / St. Martin’s)

A new Oxford Companion to Irish History is out, this time in a revised, handy paperback edition.

Originally written by a team of 87 specialists with 1,800 entries on Irish history from ancient times to the 21st century, this book would have seemed difficult to improve upon.

But as editor S.J. Connolly — an author and professor of Irish History at Queens University, Belfast — explains in a preface “the appearance of a second edition provides the opportunity for a variety of additions and improvements.”

Mainly, the new edition offers expanded articles and entries on the visual arts, as well as what Connolly calls “Irish prehistory.” 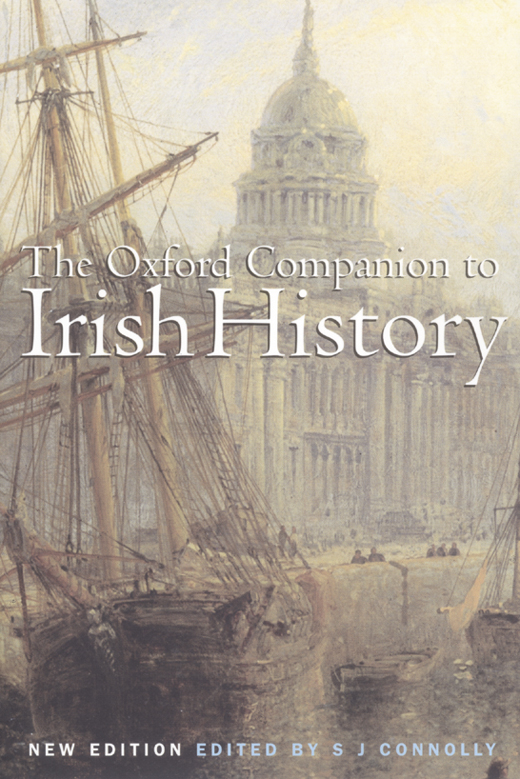 The Oxford Companion to Irish History, edited by S.J. Connolly.

This new edition also allows those who missed the first release of this valuable resource to pick it up this time around.

As with the first edition, well-known people and events are re-examined in light of challenging new research. Meanwhile, women’s history, public health and other topics often ignored in past histories are explored. Useful maps and a subject index are also included.

All in all The Oxford Companion to Irish History is a good (and reasonably priced) addition to any Irish book lover’s reference shelf. ($24.95 / 650 pages / Oxford)

Not many people can say they have been praised by both the staid Dan Rather and the raunchy Howard Stern.

But Westchester radio titan William O’Shaugnessy has made such diverse friends over his 40-plus year in the radio business.

Most recently, as president of Whitney Radio and editorial director of WVOX and WRTN in Westchester, New York, O’Shaughnessy has managed to rub elbows with the elite of East Coast politics, publishing and society, all the while appearing on the New York Post’s famous “Page 6.”

All of O’Shaughnessy’s influential friends and sharp opinions are on display in his fat new book More Riffs, Rants and Raves, a collection of editorials, interviews, speeches, remembrances and more.

To leaf through More Riffs, Rants and Raves is to stroll through New York and America through the last 40 years.

There are references to Toots Shor and the 21 Club and great old Irish machine politicians of the past.

There are profiles of and elegies to memorable figures from New York’s past, from Hugh Doyle to Francis Cardinal Spellman. There are also great interviews with Pete Hamill, Jimmy Breslin, Mary Higgins Clark and many more.

O’Shaughnessy has come a long way from Elmira, New York, where he was born, and many of his uncles did hard railroad work in central New York state.

O’Shaughnessy is a member of a dying breed, an articulate liberal Republican, and an Irish American one at that. ($35 / 781 pages / Fordham University Press)

Northern Ireland in the 1960s and 1970s is an era that many novelists have looked to. Damian McNicholl’s A Son Called Gabriel is the latest such book. It is a bittersweet coming-of-age tale, another element which seems all too familiar.

Nevertheless, McNicholl’s book is ultimately more heartfelt and funny than it is redundant. 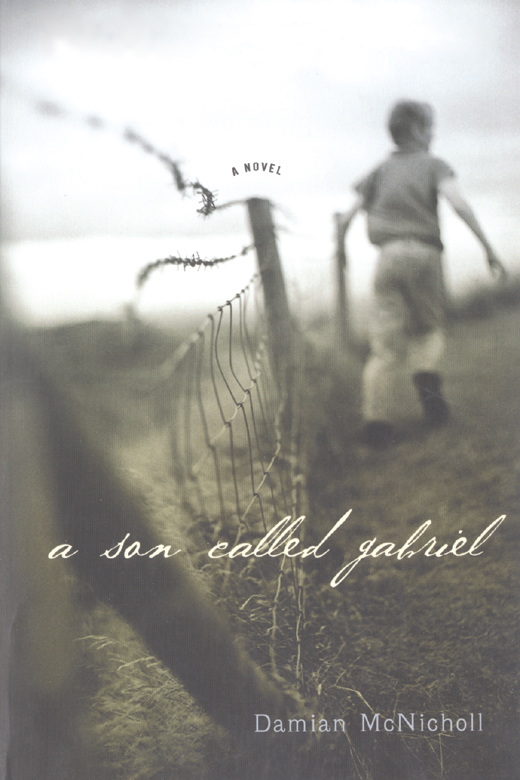 McNicholl’s title refers to Gabriel Harkin, the oldest of four children in a working-class Catholic family. Of course, it is a volatile time in which Gabriel is growing up. He and his family know there are strict rules which must be followed when it comes to religion and politics.

Gabriel ultimately grasps he’s different from the other kids around him (in many way, we learn). Yet he opts for silence and repression to cope.

Little by little, however, Gabriel (along with the readers) learn that Gabriel may not be so different from those around him after all. Which does not mean it will be easy for McNicholl’s characters to change their environment or face the future.

McNicholl was born in Northern Ireland and attended college in Wales. He came to the U.S. in 1992 where he worked in New York City as an attorney. He now lives in Pennsylvania, and is working on his second novel.

McNicholl’s publishers are (of course) comparing A Son Called Gabriel to Angela’s Ashes, which is not necessary. This novel, though a bit melodramatic at times, stands well enough on its own. ($22.95/ 352 pages/ CDS Books)

Harry Fielding is back in the latest of Philip Davidson’s novels revolving around the crooked spy desperate to straighten himself out.

The Long Suit is set in motion on a Long Island golf course, where there are three golf balls and a bullet-ridden corpse. 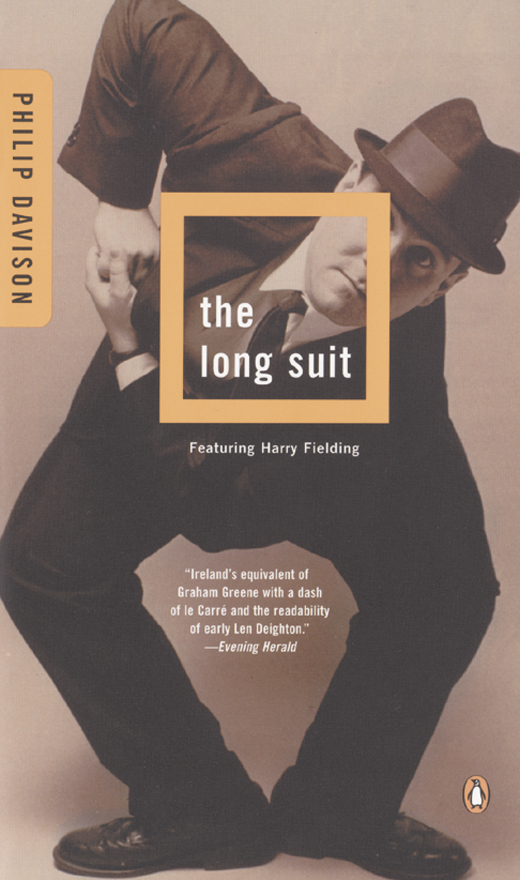 The Long Suit, by Philip Davidson.

Davidson (born in 1957 in Dublin) puts the call out once again for Harry Fielding, as well as a new partner. Both are quickly playing the games preferred by the British secret service.

As he did in the first two Fielding novels (The Crooked Man and McKenzie’s Friend) Davidson sets a tone of dry wit amidst the twists, tums and surprises. This time around, it is Fielding’s tempestuous partner who may be causing him more trouble than any of his enemies, leaving Fielding to wonder if he has been set up, and if his life is actually in jeopardy. The Long Suit is that rare thing: a smart page-turner. ($14 / 278 pages / Penguin)

One does not approach a book written by a fellow named Joseph Califano expecting to hear much about the Irish-American experience.

But as it tums out, Califano — who would go on to become a major power broker and policy expert in Washington — has a grandfather who was the child of Famine immigrants, a fact he recalls with great detail in his new memoir Inside: A Public and Private Life.

Califano’s book charts his path from the gritty streets of 1940s Brooklyn to a the power corridors of Washington.

“Grandfather Thomas Peter Gill was born in Brooklyn in 1845,” Califano writes, “one of seven children for Irish immigrants John Gill, a dry-goods merchant from Ballinalee in Longford, and Mary Fahey, who had emigrated from Eyrecourt in Galway.”

Califano’s portrait of growing up in melting pot Brooklyn — he had Italian and English, as well as Irish roots — is sharp and poignant. 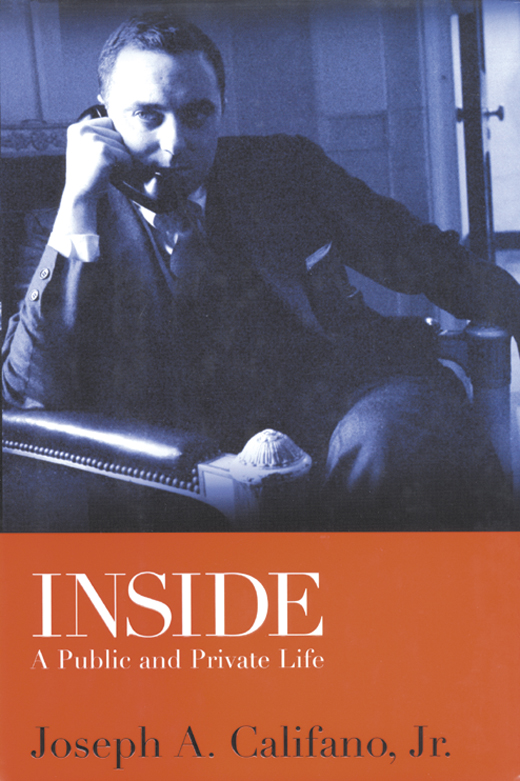 Inside: A Public and Private Life, by Joseph Califano.

His mother’s stories about the vaunted “Gill women” are recalled with particular emotion.

Califano’s parents instilled in young Joe a strong work ethic and devotion to the Church which took him from a Jesuit education to Harvard Law School.

He eventually served in the Pentagon, and under Lyndon Johnson, later serving in the cabinet of President Jimmy Carter.

But the best passages in Inside are devoted to his exploration of what it means to be Catholic in America (Califano was sexually abused by a priest while on a retreat in 1948), as well as the current work he does for the National Center on Addiction and Substance Abuse, which he founded. ($30 / 539 pages / Public Affairs)

The title of Cadogan Guides latest book Flying Visits to Ireland is not very helpful. (How else would most Americans get to Ireland?) But this guide is most handy once your plane has landed, particularly if you’re visiting Ireland for the first time, or if you are interested in seeing some places in the country other than Dublin.

There are all sorts of tips and maps about how to get around the country, where to stay, what to see, why you should want to see it and what it costs. ($17.95 / 251 pages / Globe Pequot Press) ♦