By Patricia Harty and Adam Farley
April / May 2017

Terry O’Sullivan became the tenth General President of the Laborers’ International Union of North America (LiUNA) on January 1, 2000, and was unanimously reelected to his fourth full term at the union’s 25th International Convention in 2016. He was inducted into the Irish America Hall of Fame in March, 2016, when this profile was written.

“We’re proud that through collective bargaining, LiUNA has provided generations of our members a pathway to the middle class,” O’Sullivan said, in a conversation with editor Patricia Harty shortly after he was reelected to his fourth full term at the union’s 25th International Convention in 2016. “That work is part of a broader struggle for justice, and we will never back up, never back down, never retreat, and never surrender in the never-ending battle for workers’ rights, for immigrant rights, for civil rights, and for human rights.” 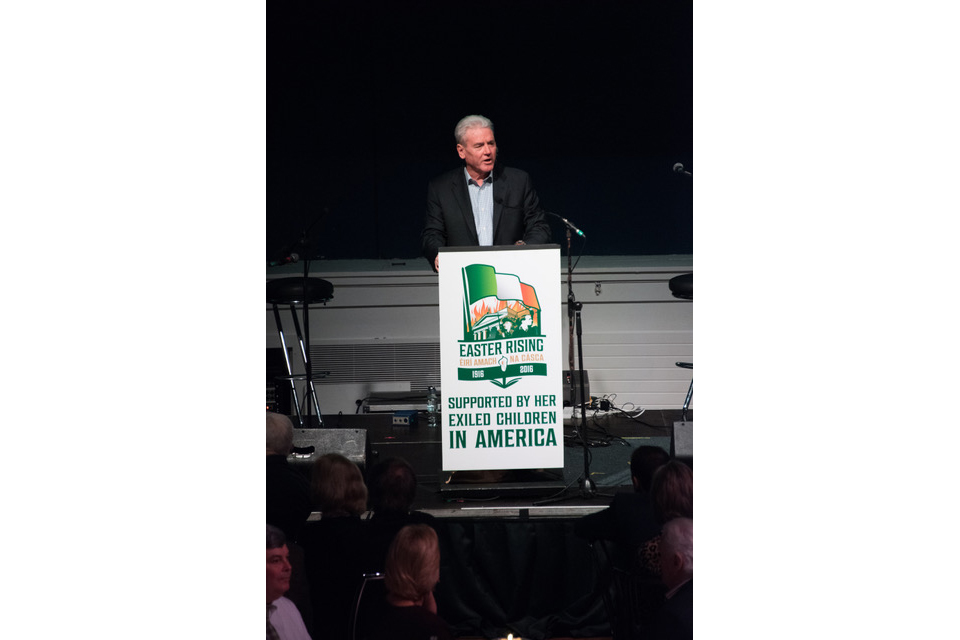 O’Sullivan is hopeful about the future of LiUNA and the building trades. “Work is booming for us, quite honestly,” he says. “Canadian construction industry is booming. In the United States, our construction work is booming in a whole host of cities across the country, and overall it is really strong…. Our membership is up, our work hours for our members are up, so we see a strong and vibrant construction economy for at least the next five years in the U.S. and Canada.”

Moreover, he’s not afraid to hold controversial meetings or ideas in service of creating jobs. Unions, long a bastion of the left in the U.S., came out overwhelmingly for Hillary Clinton in the 2016 election, O’Sullivan and LiUNA not excluded. So while some found it surprising that O’Sullivan has long been a fierce supporter of the Keystone XL pipeline and the Dakota Access Pipeline, challenging the environmental wing of the progressive movement, anyone with a cursory knowledge of O’Sullivan’s commitments to jobs shouldn’t have been. More than 1,100 of the workers on the DAPL were LiUNA members, and O’Sullivan takes the fact that they were forced to halt work personally. Three days after President Donald Trump was inaugurated, O’Sullivan and other labor leaders met with him and other senior officials in the Roosevelt Room at the White House. 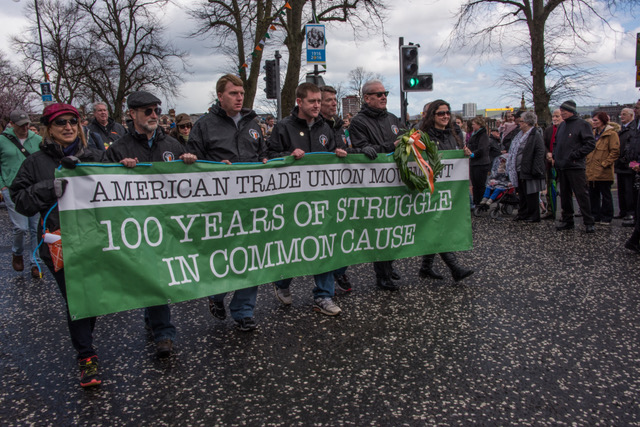 Commemorating 1916 and the participation of labor in the Irish struggle. Belfast, March 27, 2016. (Photo: Ed Rehfeld / LiUNA)

“It was a very thorough and excellent conversation about how do we keep and create more middle-class jobs. I would say that that was the central theme of the meeting. And the President told us what he was going to do, and less than 24 hours after that meeting, you saw the five executive orders all of which we were supportive of, that he had told us he was going to do.”

He isn’t much concerned with which side of the aisle an infrastructure bill comes from. His primary goal is, for whichever plan is adopted, that “there will be more than enough work for most every contractor in this country, if they are successful and find the funding for it. That is where the rubber meets the road.” 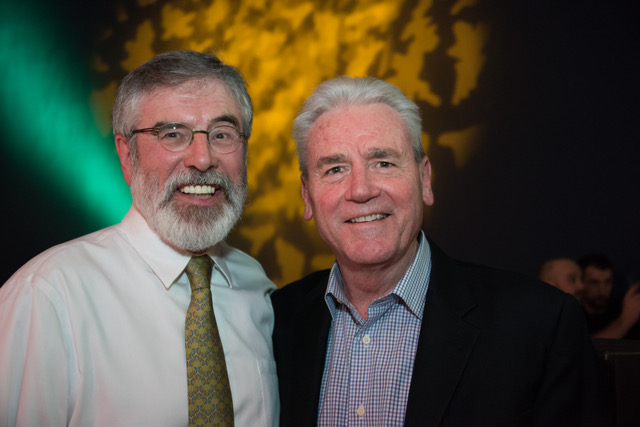 “In our business, in the construction industry, not unlike other sectors, anytime that the employer can use your immigration status to not pay you, to keep holding you down, that is not only horrific for the individual, but it depresses wages.”

There are an estimated 50,000 undocumented Irish in the U.S., many of whom work in the building trades, and, legal status aside, they continue a long history of the Irish in the American labor force that O’Sullivan knows well and he is as passionate about Ireland as he is about the Labor Movement.

O’Sullivan is a proud supporter of Sinn Féin and a united Ireland. He serves as president of New York Friends of Ireland and chairman of the Washington, D.C. Friends of Ireland, has spoken three times at Sinn Féin’s Ard Fheis, the party’s national conference in Ireland (most recently last year), and is good friends with many of the party’s leadership, including Gerry Adams, Martin McGuinness, Mary Lou McDonald, Sinn Féin’s deputy president, and Rita O’Hare, Sinn Féin’s representative to the United States.

“My father was a Sinn Féin supporter, as was his father,” he says. “So it was natural for me to keep up the work, and keep up the fight for a free and united Ireland.” At the 2012 Ard Fheis in Kerry, O’Sullivan even got to meet his great aunt, who was 92 at the time. “It is emotional every time you go over there because you think about your family history and what people went through.” 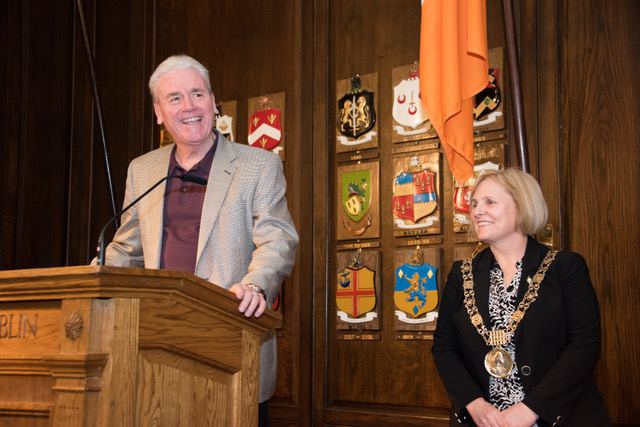 With respect to the current political climate in Northern Ireland and America’s involvement, he says to give the new administration time, noting that President Clinton “obviously had a personal interest in the Good Friday Agreement.”

But he also suggests that the importance of a united Ireland has waned as an American priority. “I would say that this is the generalization – certainly not my view, because I am going to be involved in as long as I am alive and until we get a free, united Ireland – but I think that with everything that is going on in our country, I don’t think that it is as front and center as I would like it to be. Maybe that is the best way to phrase it.”

O’Sullivan’s mother’s family emigrated from Galway and his father’s family from Kerry, a place that is like a second home for him, he says.

“While I deeply love the country of my birth, and am proud to be an American, I have always also considered myself a Kerryman, because my grandfather came from there,” he wrote in Irish America’s 1916 centenary issue, in an article on the role the trade union movement in America played in Ireland’s struggle for freedom. (He even recently acquired his Irish passport.) And it’s his father’s parents to whom he owes his affiliation with unions. After moving between New York and Boston, his grandparents eventually settled in San Francisco in the early 20th century. But when his father was seven, and his uncle was still in the womb, his grandfather died at the age of 37. Less than a decade later, it was the San Francisco local of the Laborers that helped the family get by. It was during his father’s teenage years, O’Sullivan says, that “the Laborers’ Local in San Francisco let him go to work and didn’t even charge him dues because they knew that he was bringing the money home to his mom and his younger brother.”

“So I knew about the trade union movement from obviously the first day I was born, so to speak, because of what – not the movement in particular – our union had done and provided for my father and our family.” 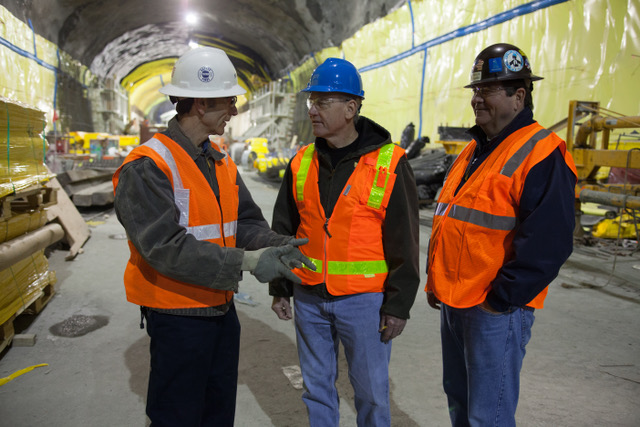 He joined Laborers’ Local 456 in 1974, while working on construction of the Washington Metro, and eventually moved to West Virginia and joined Laborer’s Local 1353 to become an instructor at the West Virginia Laborers Training Fund. In 1989, O’Sullivan became the Training Fund’s administrator, then assistant director of the LiUNA construction department in 1993; he later served as chief of staff, then as vice president, mid-Atlantic regional manager, and eventually as assistant to the general president. On January 1, 2000, he was elected general president.

When he spoke to Irish America, O’Sullivan was about to commence on several weeks of travel, which he acknowledges can get tiring at times, but also revitalizes him and his faith in his work. “There is no better calling, as far as I am concerned, and having the opportunity, the honor, the privilege to represent people and trying to make a difference in peoples’ lives is what motivates me because this union made that difference that I felt in the lives of my father and my family,” he says.

O’Sullivan enjoys spending time with his family: his wife, Yvette; his two children, Brendan and Caitlin; and his stepdaughter, Giovanna. ♦