Hamill in a photo by his photojournalist daughter, Deirdre Hamill.

If asked for a single word that accurately and completely sums up Pete Hamill’s career, there is only one answer – writer. His genre? Just about everything – novels, short stories, history, biography, memoir, magazine features, newspaper columns, television pilots, adapted film scripts, Bob Dylan liner notes. At his core though, he is a newsman, and it is this journalistic foundation that has influenced his lifetime of work and thinking.

“Usually, I work every day, seven days a week,” he says. “When I go three days without writing, my body aches with anxiety, my mood is irritable, my night dreams grow wild with unconscious invention.”

At the time, Piecework was his 13th published book. To date, he has published now 20 distinct works, including 11 novels, two short story collections, two memoirs, a biography, and four works of collected journalism. This does not include those books on which he is credited as a co-author.

But if the work of writing allowed Hamill to remain employed these past 56 years, it’s his medium and wide-ranging subject matter that has allowed him to ascend to a position of influence and high regard across broad demographics. He has written about topics that range from wars in Vietnam, Nicaragua, Lebanon, and Northern Ireland to rock and roll and the underclass of New York City. As reviewer Patrick Butler wrote in 2012, he’s “the only guy who can effectively write about racetracks and social justice.”

He has been prolific indeed, but so have many writers less acclaimed. It’s Hamill’s combination of personal history and subjectivity with on-the-ground reporting that makes him unique. He helped pioneer New Journalism in the 60s and 70s, adding literary techniques to the dry language of newsprint that reinvigorated both local tabloid dailies as well as nationally syndicated papers of record and glossy magazines. Later, he would flip that formula to employ the sparse language of journalism to help popularize the memoir, lend a sense of authority to his novels (many of which were based on historical events), and elevate the integrity of the tabloid columnist by offering insightful, nuanced, and accessible cultural commentary in his own. 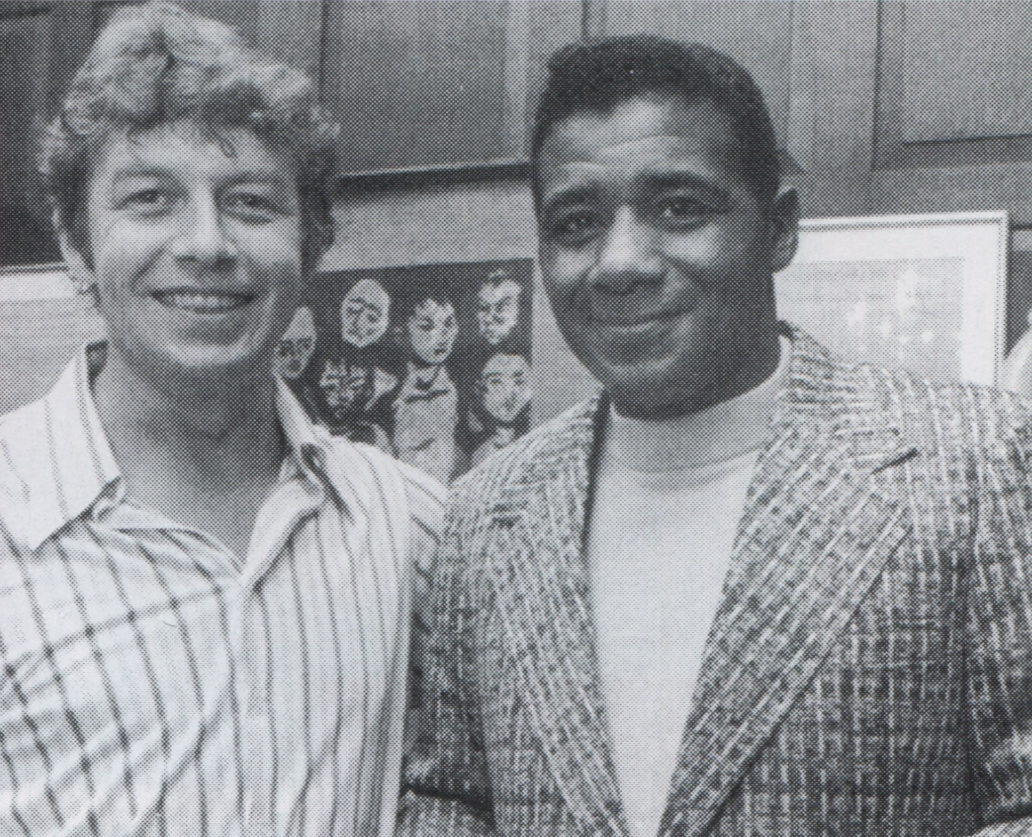 With boxer Floyd Patterson at a party in Hamill’s house in Park Slope, Brooklyn.

There’s hardly a national magazine Hamill hasn’t published in, his byline appearing in the likes of the The New Yorker, Esquire, New York, Playboy, Rolling Stone, Vanity Fair, and, just this past November, National Geographic. He is also an inveterate New York City writer, having been on staff of most of the still-extant New York daily tabloids, including both the New York Post and the Daily News (he is also the only person to serve as editor-in-chief of both these papers), as well as the Village Voice, but also folded city papers like Newsday and the Herald Tribune. This should be no surprise for a native of the five boroughs who didn’t learn to drive until the age of 36. This last fact, if any, should consummate his credentials as a New York City son.

If there is another biographical fact required to shore up his authenticity as a “native New Yorker,” it must be the fact that he is the son of immigrants, taught through the Ulster Catholic eyes of his mother that New York is a place where children can ascend beyond the caste of their parents. It is this mentality that has informed most of his writing and made him such an enduring American author.

Born William Peter Hamill in 1935 in Brooklyn to Belfast immigrants Billy and Anne (née Devlin) Hamill, Pete was the eldest of seven children and raised in the primarily Irish neighborhood of Park Slope. His father came to New York in 1924 and had one leg amputated three years later following an injury sustained playing semi-pro soccer in Brooklyn. His mother’s first day in New York was Tuesday, October 29, 1929, the day the stock market crashed. They married in 1934.

In a 2003 interview with Patricia Harty in this magazine, Hamill described his father as “an Ulster man in his inability to express certain emotions.” Billy worked various jobs, including at a grocery store, in a war plant, and at a lighting fixture factory, and was very much of the opinion that his children would remain working class like him.

“He thought that once I got that job in the Brooklyn Navy Yard, a civil service job, I should stay there for life,” Hamill told Harty.

Instead, it was Hamill’s mother whom he calls one of the keys to his success.

“My mother was better educated – she’d finished high school, which was a triumph for any woman in those days, but for a Catholic woman in Belfast it was amazing. And because her father had gone to sea, she understood that there was a wider world out there, which is why she loved New York when she got here,” Hamill said.

“She thought that the whole point of this place was that you were not a prisoner of what your father or your grandfather did.”

Hamill attended Holy Name of Jesus grammar school and got his first newspaper job at the age of 11, delivering the Brooklyn Daily Eagle. At 14, he was awarded a scholarship to the prestigious, Jesuit-run Regis High School in Manhattan, but dropped out two years later to work at the Brooklyn Navy Yard. (He received an honorary diploma in 2010, two days after his 75th birthday.) He later joined the Navy, served four years, and went to college to study painting in Mexico City and the School of Visual Arts in New York. He joined an advertising agency as a graphic designer, but still had notions of being a newspaperman. 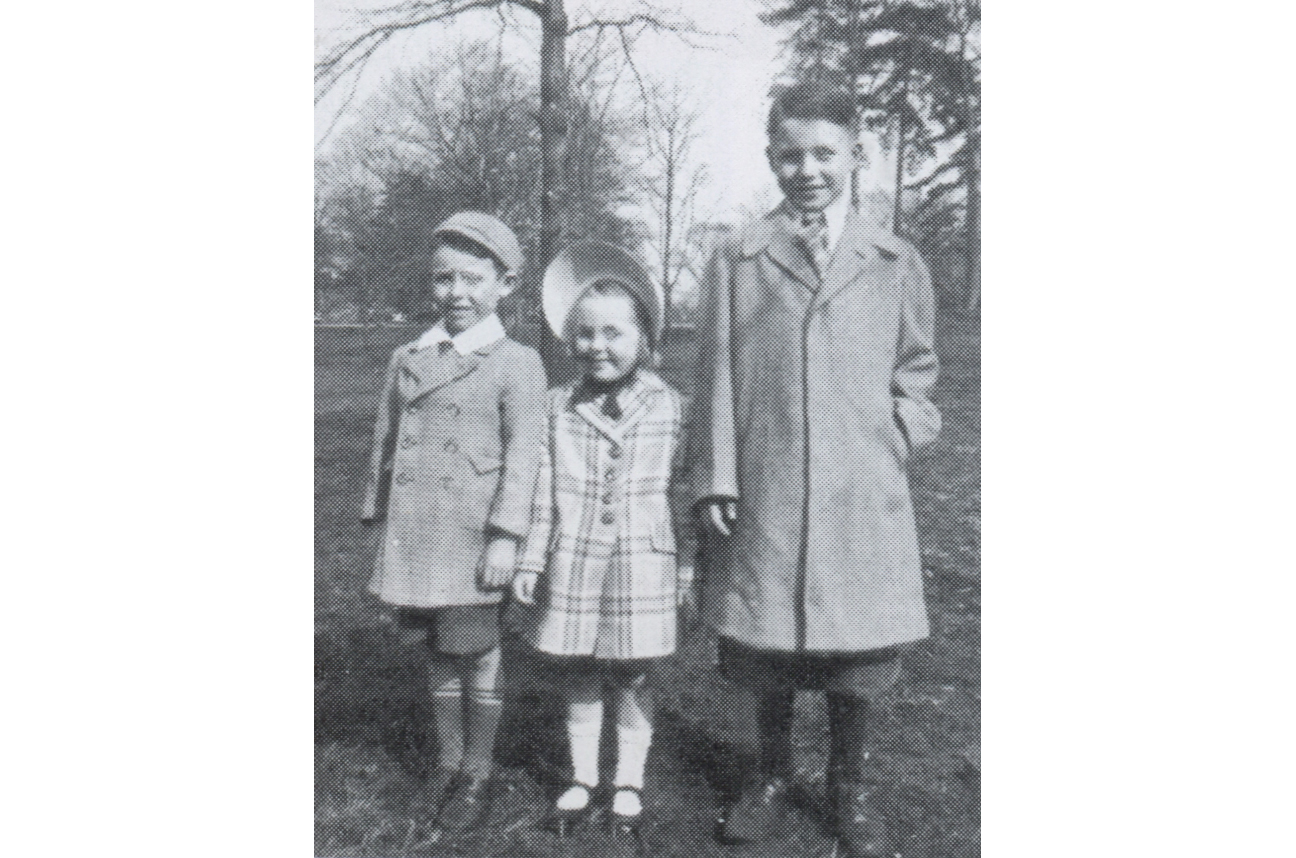 Hamill (right) with brother Tommy and sister Kathleen on an Easter Sunday in Brooklyn’s Prospect Park.

“I started when I was ten or eleven on the comic strips, and I found my way to the rest of the paper – and I loved it. I also had these notions about being a newspaperman that was shaped by the movies – Roman Holiday with Gregory Peck and Audrey Hepburn, mixed in with An American in Paris and Joel McCrea in Foreign Correspondent – the sort of trench coat guys.”

In 1959 or 1960, he thinks, he wrote a few letters to the editor of the New York Post that were published and was called into a meeting with the editor-in-chief. By June 1960, he was on the staff as a night reporter.

“There were some amazingly good craftsmen on a very small staff, so that I was able to do two or three stories at night,” he recalls. “And I loved it more than anything I’d ever done.”

By 1968, he had published his first novel, A Killing for Christ, about a conspiracy to assassinate the Pope on Easter Sunday. In 1971 he published his first collection of journalism. He won a Grammy in 1975 for his liner notes on Bob Dylan’s Blood on the Tracks. During this time, he lived variously in Mexico City, Barcelona, Dublin, Puerto Rico, Rome, Los Angeles, and Santa Fe, but kept returning to New York and became known as a muscular yet sentimental writer and local raconteur who dated both Shirley Maclaine and Jacqueline Kennedy Onassis before marrying his current wife, Japanese journalist Fukiko Aoki, in the late 1980s. He and Fukiko currently live in Manhattan and Hamill has two daughters from a previous marriage.

In 1994, Hamill published what is arguably his best-known work, A Drinking Life, a memoir about his childhood and early years reporting, focusing on his embrace of drinking and eventual decision to abstain. His other books include, Forever, a novel about the history of New York; Snow in August, which follows the unlikely friendship between an 11-year-old Irish Catholic boy and an elderly Jewish rabbi in 1940s Brooklyn; and Why Sinatra Matters, which was recently reissued with a new introduction by Hamill in honor of Sinatra’s 100th birthday. 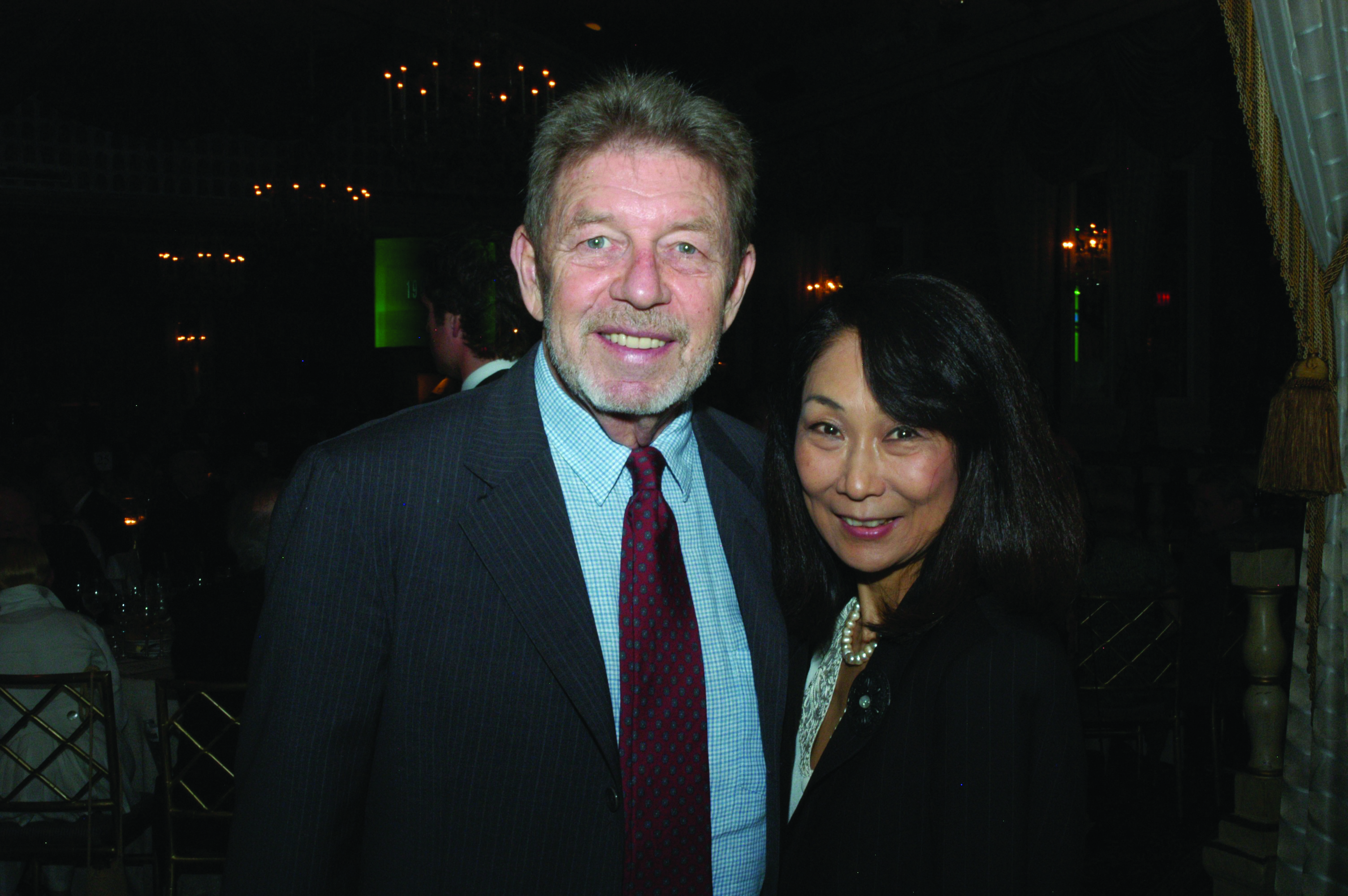 Hamill with his wife Fukiko.

But if it was his mother’s ambition that allowed Hamill to have his own, it was the working class world of his father he would return to again and again in his writing, which is why he has endured in the national imagination. Neither wholly nostalgic for a bygone city nor purely historical, his writing is defined by a sense of self-awareness and acceptance of urban change that is tinged with individual subjectivity. Working-class immigrant neighborhoods gentrify, immigrants from new countries come in, buildings are demolished and others built, typewriters become decorations. The constant, however, is newness, and for Hamill, there’s no occupation more symbolic of that than a newspaperman.

Asked in 1995 to give advice to a “newspaper dreamer” by the New York Times, he explained that “If you’re going into it in order to have a pension plan, don’t do it.”

“It was a lot more fun when the field was full of bohemian anarchists who stuck around for a while, threw a typewriter out the window and moved on. When I broke in, there were seven functioning newspapers, so at least you could go down the block if some butcher on the copy desk destroyed your masterpiece that morning,” he said.

“But it’s the most honorable work I can think of doing.” ♦

Pete Hamill was a great journalist, and an even better big brother