On the Prowl for Springsteen’s
Irish Roots

Bruce Springsteen with his mother (with the gold medallion) and aunts at Ellis Island.

Roots detective Megan Smolenyak explores the National Library of Ireland’s online collection of Catholic parish registers, uncovers entries for ancestors of a few well-know Irish Americans, including Bruce Springsteen, and offers a guide to finding yours.

The last few years have been kind to those of us interested in pursuing our Irish roots. Between 2007 and 2010, the National Archives of Ireland rolled out the entirety of the 1901 and 1911 Irish census, posting these records – digitized, searchable, and free – online. This database has proved invaluable for descendants of Ellis Island-era immigrants, and also handy for tracking down aging hometown siblings of Famine-era departees.

And now, motivated at least partly by the evident correlation between ancestral curiosity and tourism, the Irish government has done it again. Specifically, on July 8, the National Library of Ireland (NLI) introduced a massive online collection of Catholic parish registers – digitized, free, and quasi-searchable (more on this shortly). Speaking at the launch, Taoiseach Enda Kenny stated that there was “no doubt the registers will contribute to the number of genealogical tourists to Ireland.”

All told, 3,550 registers from 1,086 parishes have been scanned and uploaded, resulting in a website offering more than 370,000 digital images. Coverage reflects the availability of original records, so it varies from parish to parish, starting as early as the 1740s for some and as late as the 1860s for others.

There’s just one small (and probably temporary) catch: The site does not incorporate any sort of index or transcription, so unearthing records pertaining to your family will involve one of the following scenarios. You’ll need to:

Both to familiarize myself with this remarkable collection and provide a sampling of its content, I went on a mini-quest seeking entries for ancestors of a few well-known Irish Americans, but there’s no need to be famous to benefit. If you’ve got Catholic forebears, odds are excellent that at least some of them are included, and now you can surf from home to help make your next visit to Ireland even more special.

Several years ago, I had the pleasure of watching Bruce Springsteen accept the Ellis Island Family Heritage Award with his lively mother and aunts, whose parents were Italian immigrants (see a charming video of the event below). I love researching immigrant roots of all origins, but admit that my ears perked up when he mentioned that he and his wife, Patti, were carrying on the “Irish-Italian mating tradition of Central New Jersey” and described his father as “a turbulent Irishman.”

Preparing to write about the National Library of Ireland’s recently released Catholic parish records, I flashed back to that day and thought that an ancestor of “The Boss” would be a fun addition. But to do this, I would need to clamber up his family tree, identify one or more Irish immigrants, and then ferret them out of this new database, and as anyone who’s ever dabbled in Irish genealogy knows, that’s often easier said than done.

The key is identifying the home town or parish – or at a bare minimum, the county – and particularly for those descended from Famine emigrants when records were patchy and barebones, this can be a challenge.

Because Springsteen is so famous, I was well aware that I could probably Google my way to a fair bit about his family tree, including his Irish ancestry, but experience has taught me that such sources are often riddled with errors, so as is my habit, I started from scratch. This, it turned out, was a smart move.

Diving in, I soon discovered that despite his surname, Bruce’s father, Douglas Frederick Springsteen (nicknamed “Dutch”) was at least three-quarters Irish. For crossing the pond, I could have targeted his O’Hagan, Farrell, Sullivan, Garrity, or McNicholas lines, but opted for Garrity – mainly because Ann Garrity caught my attention.

Born in Ireland, Ann had journeyed to Freehold, New Jersey, married a fellow Irish immigrant, and given birth to at least eight children, only to be widowed at age 34. Perhaps as a matter of practicality, she married a widowed Irishman the following year, and the next census shows them with nine children – a mixture of his, hers and theirs – still living at home.

Ann’s misfortune is to our benefit today, as Bruce is descended from one of the twin girls from her second marriage. Had she not lost her first husband, none of us would be able to belt out “Born in the USA.”

Assorted records for Ann indicated that she was born sometime between 1835 and 1848. I suspected that the truth was in the early part of this range, but with the names Ann and Garrity both being quite common, I needed more information to try to pick up her trail in Ireland. Without more specifics, I could dig through all the databases I wanted, but have no way to pluck out the correct Ann.

Hoping to learn her parents’ names, I took a quick jaunt to the New Jersey State Archives in Trenton with my husband. Though many think everything is on the Internet, there’s plenty that’s still not, such as most of New Jersey’s birth, marriage, and death records. We scrolled through rolls of microfilm locating several records, including Ann’s death certificate which gave her parents’ names as Christopher Garrity and Julia Kelly.

Parents’ names on death certificates of immigrants are notoriously inaccurate since the survivors completing these forms usually never met their old-country grandparents, so are prone to guessing. Even so, I was optimistic in this case because I had seen the name Christopher Garrity before. In two of Ann’s census records, there was an older “Christy” Garrity living next door. I had speculated that he was related, but now I had reason to be confident that he was.

Shifting my attention from Ann to her father, I poked through records and determined that he had arrived in New Jersey before 1860 and was born around 1805-1810. While I was at it, I kept my eyes open for any other Irish-born Garritys in the area with the notion that Christopher almost certainly had more children, and identified a few candidates. All this was helpful, but didn’t tell me where to look in Ireland.

Having exhausted the more popular resources, I turned to lesser known, more specialized ones. As a youngster, I once lived in Red Bank, New Jersey near Springsteen’s hometown of Freehold, so knew of a hidden genealogical gem – a local digitization project by the Middletown Township and Red Bank public libraries to put over a hundred years of the Red Bank Register online. Entering “Christopher Garrity” and “Christy Garrity” popped up a few articles, but not what I was hoping for – his obituary. A New Jersey State Archives database recorded Christopher “Gerraty” dying in Freehold on August 26, 1884, so I had another go at the newspaper browsing by date. 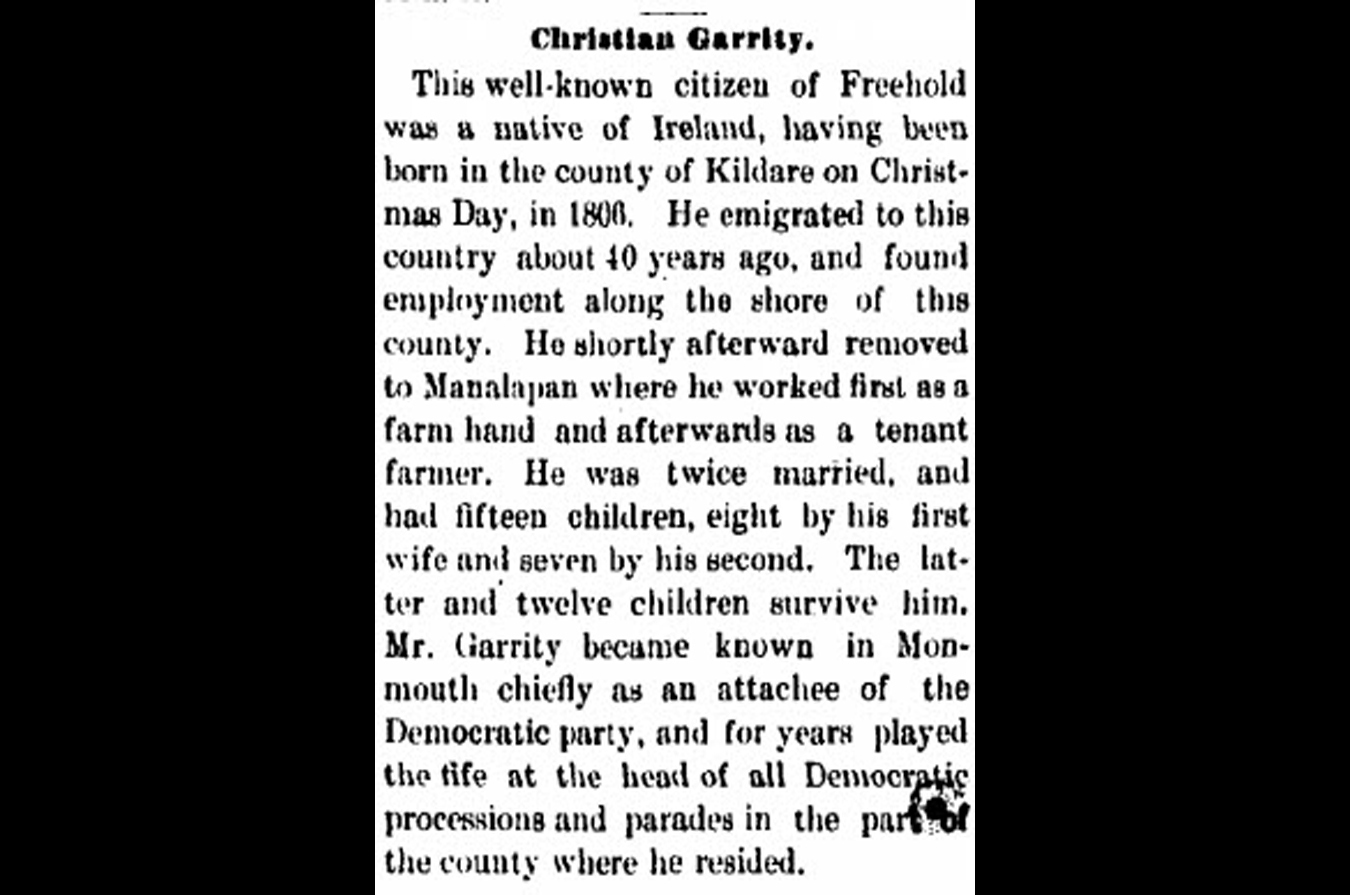 Sure enough, his obituary was there, masked because he had been slightly misidentified as “Christian” Garrity. Better yet, his obituary held the critical clue I needed. He had been born in County Kildare.

So now I knew that Ann Garrity had been born circa 1835-1848 in County Kildare to Christopher Garrity and Julia Kelly. And I had the names of a handful of potential siblings. Plenty of reasons to venture to Ireland.

Crossing my fingers that Ann’s family was among those in the online parish indexes, I performed searches at Rootsireland.ie and got mixed results. While there was no sign of Ann, I found several children born between the late 1820s and the early 1840s to Christopher “Christy” Geraty and Catherine (not Julia) Kelly – and some of them mapped with those in later Freehold, New Jersey records. A couple, though, were new names, and this would prove useful later on.

Given the issue I mentioned earlier about the accuracy of parents’ names on immigrants’ death certificates, I had no problem accepting that Ann’s mother might really have been named Catherine instead of Julia. After all, her maiden name was right. But it concerned me that Ann was missing.

To be a decent genealogist, you have to be prepared to “work” every database you deal with and show the wildcard who’s boss. Playing with different combinations of fields and renditions of names, I surfaced an Ann “Gerathy” born in December 1838 to “Charles.” His wife? Catherine Kelly. Yes, this was the Ann I was looking for, and I knew instantly what had happened. Christy’s name had been abbreviated in the original and the transcriber had taken it for “Chas,” the common, shorter version of Charles. So the seemingly straightforward name of Christopher had morphed into Christian and Charles, creating minor road blocks in two entirely different search environments, but now I was over those hurdles.

Equipped with names and dates from a specific place, I finally allowed myself to turn to the online Catholic parish registers. Ann’s entry showed that the family was from Mount Prospect in the parish of Kildare (formally known as Kildare and Rathangan) within County Kildare, so I looked for this parish. Once there, I clicked on the appropriate register and selected baptisms for December 1838 and quickly spotted Ann, along with an abbreviation of her father’s name that could easily be taken for Charles.

Taking this one step further, I sought the family in the 1853 Griffith’s Valuation and found Ann’s mother, Catherine “Geraghty” in Mount Prospect, Rathangan Parish, County Kildare. I would soon learn that her husband had left for America a couple of years earlier, which is presumably why the listing was in her name.

Ann Garrity arriving with her younger sisters in 1853. (Ancestry.com)

So it’s Rathangan – oddly also home to the singing twins known as Jedward – that gets the bragging rights for Bruce Springsteen’s Garrity roots, but I might not have discovered that had I begun my quest with basic Googling. That’s because numerous articles over the last six years assert that Ann Garrity was from Rathowen outside of Mullingar, two counties over in Westmeath. As far as I can tell, no proof was ever offered, but that hasn’t kept it from being widely accepted and repeated. I have no doubt that those who made the claim had reason to believe it, but that in itself is a lesson for how easy it is to go astray when seeking an Irish hometown – and incidentally, this isn’t the only aspect of Springsteen’s Irish heritage that most have wrong.

The flip side of this is that gaining traction on the family in their Irish hometown made it possible to uncover more. Thanks to parish records revealing additional siblings, I was able to spot Ann arriving in America in November 1853. All of 14, she was traveling with her younger sisters Catherine (age 12) and Eliza (age 10). A trio of Irish tweens crossing the ocean on their own in the winter of 1853. Now that sounds song-worthy. ♦

Megan Smolenyak  is a genealogist and the author of six books, including Trace Your Roots with DNA and Who Do You Think You Are?, a companion to the TV series. She is an incurable genealogist and sometimes author who is delighted to have found the 1824 parish marriage record for her immigrant Reynolds ancestor in the new NLI collection she writes about in the October / November 2015 issue of Irish America.